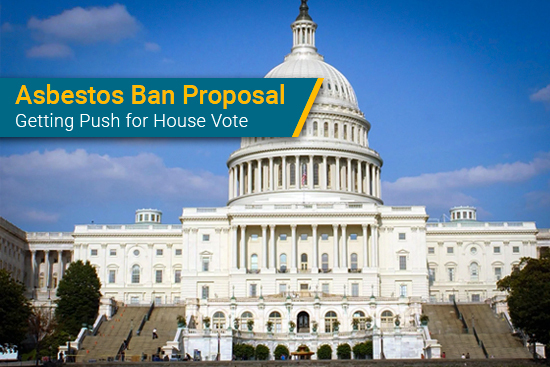 Since last November, the most recent and promising attempt to ban asbestos has sat and waited. The bill promises a wide-scale ban of asbestos, an act that should’ve happened many years ago.

Hopefully, in just a few days or weeks, we’ll move a significant step closer to saying, “Better late than never.”

The House of Representatives is currently in session, and one activist organization is making a final push to get the bill passed. The Asbestos Disease Awareness Organization (ADAO) started an online petition to urge lawmakers to approve the proposal.

“Thanks to you, landmark progress has been made to ban asbestos and the finish line is in sight,” the petition page reads. “The Alan Reinstein Ban Asbestos Now Act is ready for a vote in the U.S. House of Representatives.”

Why the Push to Ban Asbestos?

Asbestos is the only proven cause of mesothelioma, a fast-spreading cancer that takes thousands of American lives each year. Around 3,000 people in the U.S. are diagnosed with this cancer annually.

Alan Reinstein is the namesake for the bill under consideration. The bill is titled the Alan Reinstein Ban Asbestos Now Act. It would outlaw mining, manufacturing, importing, processing and selling asbestos and asbestos-containing products for commercial gain.

The last legislative action was in November 2019, when the House Energy and Commerce Committee voted 47-1 in favor of sending the bill to the House floor. If the House approves the bill, it’ll move to the Senate.

Approximately 31 years ago, the EPA attempted to ban asbestos. The try was unsuccessful, and this new bill is the latest push.

The United States is one of the few advanced first-world countries to allow commercial use of asbestos, even in a highly regulated state. The International Ban Asbestos Secretariat website lists 67 countries with national asbestos bans in place.

In 2019, the U.S. imported 100 metric tons of asbestos. Use of this cancerous substance has significantly decreased since the 20th century, which is when asbestos was considered indispensable for commercial use due to its durability and heat resistance.

At present, most commercial companies have found alternatives to asbestos. However, it still sneaks its way into cosmetic products due to careless manufacturing practices. The commercial use of asbestos is also still (somehow) a debate, as even the current Environmental Protection Agency won’t outright ban the substance.

An outright legislative ban would go far to eliminate asbestos as a health risk for current and future Americans.