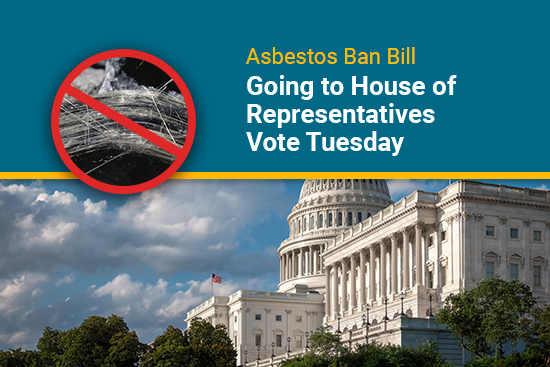 Update (September 30, 2020): The House of Representatives did not vote as anticipated on Tuesday, September 29, 2020, on the bill to ban asbestos in the United States. The vote may occur later in the week.

This week could be significant in the battle against mesothelioma and other asbestos-related diseases.

According to the Asbestos Disease Awareness Organization, the United States House of Representatives will vote on Tuesday, September 29, 2020, on the Alan Reinstein Ban Asbestos Now Act of 2019. According to the website of House Majority Leader Steny H. Hoyer, the bill is listed fourth out of 27 for the actionable items scheduled for this week’s House agenda.

The bill, titled House Resolution 1603, would outlaw all commercial aspects of producing and using asbestos. The vote would be a significant step forward in removing asbestos from American industrial culture.

The Asbestos Disease Awareness Organization (ADAO) announced the news on Saturday, September 26, which was Mesothelioma Awareness Day. It’s an annual event raising awareness of this rare cancer, which spawns solely from asbestos exposure and affects approximately 3,000 Americans each year.

Linda Reinstein, the president of the ADAO, is the widow of the bill’s namesake, Alan Reinstein. She provided a statement in the ADAO’s website press release:

“This bill will stop hundreds of metric tons of asbestos from entering the United States each year and will protect Americans from being exposed to the deadly threat of asbestos found in homes, schools, workplaces and on consumer shelves.

“As we saw in the House Energy and Commerce Committee, we expect a strong vote in the House. We then expect the Senate to affirm that it is past time for the U.S. to join the nearly 70 countries that have already banned asbestos to protect their citizens from this known carcinogen.”

If the House approves H.R. 1603 on Tuesday, then it’ll move to the Senate.

In November 2019, the U.S. House Energy and Commerce Committee voted 47-1 in favor of the proposed law. The U.S. Senate introduced a sibling bill, titled S. 717, in March 2019. The Senate has not taken any action since.

A couple months ago, the ADAO started an online petition calling for a House vote. Mesothelioma Guide reported around the same time that a vote seemed likely for 2020.

What Does the Asbestos Ban Propose?

Within one year of enactment, H.R. 1603 would ban most reasons to import and use asbestos. The provision allows manufacturers to find alternatives for their products. Chlorine companies have a longer adjustment window: up to 10 years.

There are two additional noteworthy aspects of the bill:

Asbestos rose to the height of its popularity in America during the 20th century. It became a staple of industrialism due to its fire resistance, durability and affordability. For years, asbestos protected many creations from fire and heat damage, including:

However, asbestos did not protect the people who lived and worked inside these structures, especially not those who helped build them. Asbestos put these people in danger of an aggressive cancer (mesothelioma) for which there is no cure and limited treatment options.

The U.S. is one of the few first-world countries without a ban on asbestos. While the country stopped mining for the mineral in 2002, it still imports asbestos and uses the mineral in specific industries. Over the past four years, the U.S. has imported between 100 and 750 metric tons per year.

The Environmental Protection Agency (EPA) recently changed its regulations for asbestos. The EPA now requires all companies to receive approval before using asbestos in its products.

While the EPA argues that the change will prevent unsafe applications, the ADAO and other activist groups feel the EPA has more leeway to approve previously banned uses.

Numerous states filed a lawsuit against the EPA regarding its indifferent attitude towards asbestos. One report even accused the EPA of ignoring scientists regarding the health risks of asbestos.

In recent years, the public has learned of a new consumer risk related to asbestos. The mineral can find its way into talc-based products, such as cosmetics and cleaning powders. Talc is a mineral that cohabits the same soil as asbestos, and the two mix together.

Johnson & Johnson’s Baby Powder product is at the center of thousands of asbestos lawsuits. The company even stopped the production and sale of the product’s talc form in North America.