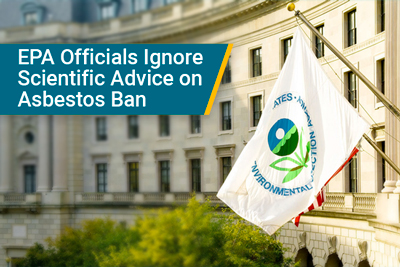 The Environmental Protection Agency (EPA) remains at the center of criticism regarding its handling of asbestos regulations.

In April 2019, the EPA announced a change to its asbestos regulations regarding use of the mineral in consumer goods. The rules are more restrictive, requiring any company wishing to use asbestos to seek EPA approval first. However, critics of the ruling say it allows a small opening for companies to use the substance in ways that were once banned.

To make the agency look even worse, the New York Times revealed that scientists and lawyers working for the EPA pushed for a total ban of asbestos. However, the agency ignored these experts. More than 60 countries already have outlawed the use of asbestos.

“Rather than allow for (even with restrictions) any new uses for asbestos, E.P.A. should seek to ban all new uses of asbestos because the extreme harm from this chemical substance outweighs any benefit — and because there are adequate alternatives to asbestos,” staff members wrote in one of two memos, both of which the New York Times published on its website.

Asbestos is the only known cause of mesothelioma, a rare and aggressive cancer that has claimed the lives of thousands of Americans. The carcinogen is a fire-resistant mineral and was used for decades in construction and insulation materials. When disturbed, the substance can enter the air undetected and poses a risk for anyone nearby. Once ingested or inhaled, asbestos enters the body and irritates cells, which leads to tumors forming.

Where the U.S. Stands on Asbestos

While asbestos manufacturing has stopped in the United States, the country still imports the substance for consumer use. The EPA is conducting a review of asbestos, including its health risks, before enacting any complete ban of the substance. Alexandra Dunn, the EPA’s assistant administrator for chemical safety, told the House Energy and Commerce Committee as much when she argued against asbestos-ban legislation.

The New York Times reported that the agency’s evaluation should be finished by December. Even if a ban comes, proponents of the move are not OK with waiting any longer.

According to the New York Times report, EPA staff members wrote in the memos that the agency’s review process was misguided. Experts specifically criticized the limited evaluation: the EPA only intends to review six fibers of asbestos and is excluding some harmful types. Not analyzing all types of asbestos could lead to a faulty decision when the review concludes.

The EPA has relaxed environmental regulations recently, against the advice of scientists, and the decision not to ban asbestos is another example. President Donald Trump has a history of affinity for asbestos, once tweeting that the substance would have prevented the World Trade Center buildings from burning. Earlier, in 2005, he testified in support of asbestos to the Senate Homeland Security and Governmental Affairs committee.

Some Lawmakers Still Pressing for Ban

There is movement in the national government for a complete ban. A proposed law in Congress would eliminate all use of asbestos. New Jersey also outlawed the sale or distribution of all products containing asbestos.

U.S. Rep. Frank Pallone, of New Jersey’s 6th District of the House of Representatives, said after the EPA news that he would continue pushing for a federal ban of asbestos. He’s the chairman of the House Energy and Commerce Committee.

“Anything less than a full ban is unacceptable,” Pallone said during a press conference in Highland Park, according to the website NJ Spotlight.

If you have mesothelioma or know someone with the disease, you understand first-hand how dangerous asbestos is. Contact your local representative and urge them to push Congress and the EPA toward a complete asbestos ban. Doing so could save thousands of lives.

Even if Congress bans asbestos soon, many people were exposed to the substance and have suffered from mesothelioma. If you or a loved one has this disease, contact Mesothelioma Guide to speak with our patient advocate, Jenna Campagna. She can explain the disease’s characteristics and help you find a mesothelioma specialist. Additionally, she can also connect you with someone who will explain your legal rights and help you receive compensation. Email her at jenna@mesotheliomaguide.com to get the help you deserve.