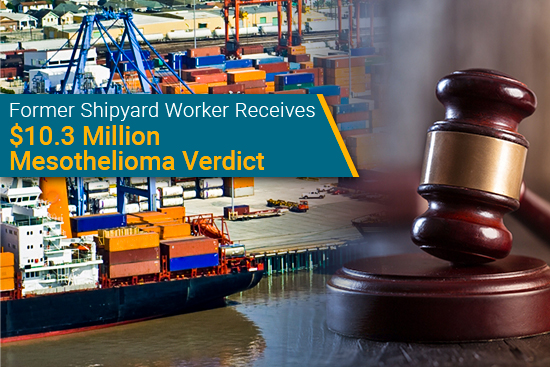 Shipyard workers face some of the highest rates of mesothelioma among all occupations. Anyone who develops this rare cancer should know their legal rights.

A former shipyard worker from New Orleans is an example of why we often urge victims to file mesothelioma lawsuits.

Henry P., a 74-year-old man who currently resides in Texas, received a $10.3 million verdict in his favor. His attorney filed his case in New Orleans, where he worked in the 1960s as a longshoreman at the port.

The case was against Ports America Gulfport, Inc., Atlantic & Gulf, Cooper T. Smith Stevedoring Co., and South African Marine. The current mesothelioma verdict includes only compensatory damages. There are no punitive damages yet reported, which means the total judgment could be higher.

Mesothelioma is quite common among shipyard workers, especially longshoremen. This task is the “front lines” of shipyard work. Longshoremen like Henry loaded and unloaded the port’s ships, and these shipments often contained bags of asbestos.

Henry worked as a longshoreman for 4-5 years in New Orleans during the 1960s, when the United States economy still relied on asbestos. At the time, most scientists hadn’t connected asbestos to mesothelioma. That revelation came around a decade after Henry stopped working as a longshoreman.

However, the companies producing and profiting off asbestos knew it was a health risk. Their maliciousness is why so many are liable for lawsuits.

The ships themselves also were constructed with this cancerous mineral. The risk of fires at sea was a significant enough concern for shipbuilders to coat floorboards, ceilings, pipes and more with asbestos, which is an insulant material used to prevent overheating.

Mesothelioma doesn’t develop quickly, so there was no way for Henry to know he was at risk when performing his longshoreman duties. Mesothelioma can take half a century to materialize, which is what occurred for Henry.

We urge all people with mesothelioma — whether a former shipyard worker or another trade — to follow those like Henry. Take action and seek compensation for your mesothelioma. You and your family are entitled to financial help, most notably from the companies responsible for your cancer. Lawyers for mesothelioma can help with these cases.