Dr. Carbone is one of the top mesothelioma researchers in the country. His genetic discoveries about mesothelioma have led to more personalized treatment.

Dr. Carbone is the Director of Thoracic Oncology at the University of Hawaii Cancer Center. He has conducted research that has become essential to understanding, diagnosing and treating mesothelioma. By discovering more about mesothelioma at the molecular level, Dr. Carbone is opening pathways to novel treatment approaches for mesothelioma. Learn more about emerging treatments in our free Mesothelioma Guide.

Originally hailing from Italy, Dr. Carbone came to Bethesda, MD in 1986 where he worked at the National Institutes of Health until 1994. He subsequently moved to the University of Chicago where he taught pathology and was the Director of Thoracic Oncology until 2006 when he finally headed to the University of Hawaii. He has since developed a venerable research program there with a full multidisciplinary staff.

Dr. Carbone’s focus is primarily on the molecular understanding of mesothelioma. His research is the foundation for the development of new drugs to treat mesothelioma. He was even knighted by the Republic of Italy in 2003 for his achievements in medicine and science.

Get Connected To Dr. Michele Carbone 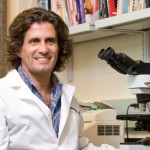 With a strong focus on research, Dr. Carbone has a deep understanding of how mesothelioma develops and how to treat it. His research has led to innovations in diagnoses, which in turn, has allowed patients to undergo more aggressive treatments.

The University of Hawaii Cancer Center is a leader in mesothelioma research. With the help of Dr. Carbone, the program here has become one of the top in the nation. Other features include:

One of his biggest breakthroughs involved the discovery of a DNA tumor virus known as SV40. Studies conducted on SV40 determined that it contributes to the development of mesothelioma tumors and many mesothelioma patients have this virus. Therefore, those who have SV40 present have a higher risk of developing mesothelioma. This information could lead to earlier diagnoses as well as new treatments that block SV40.

More recently, Dr. Carbone participated in a multi-cancer center research effort that revealed a cancer protein (HMGB1) that is found in higher levels in mesothelioma patients. The results of this study found the basis for the creation of new immunotherapy drugs as well.

In 1997, Dr. Carbone began doing some investigational work to understand why there were so many cases of mesothelioma in the Turkish region of Cappadocia. The cases of mesothelioma here are so prevalent that villages in the region have earned the name “Turkish Cancer Villages” by some. Over 50 percent of the deaths in this region were related to mesothelioma.

The culprit in Cappadocia is a naturally occurring asbestos-like substance known as erionite. It is a mineral that develops from volcanic ash and water and is usually found in gravel and stone. In the case of Cappadocia, this stone was used in the construction of most of the houses in the region.

Part of the research Dr. Carbone conducted was focused on determining how much genetic predispositions were a contributing factor in mesothelioma.

Dr. Carbone’s work in Cappadocia showed that erionite was the culprit in the region, but also that those with a certain genetic mutation were more susceptible to mesothelioma. The discovery of this genetic mutation could be a basis for identifying those at risk and making earlier diagnoses. Dr. Carbone’s work also led to the creation of two erionite-free villages in Cappadocia.

This research can benefit those all over the U.S. because of the prevalence of this mineral in the country. One of the areas of largest concern regarding erionite is North Dakota, where long gravel roads are made up of considerable amounts of erionite. It has also been spread through baseball fields and parking lots in the state.

Dr. Carbone’s research has led to the EPA taking preventive action to inhibit an epidemic of mesothelioma similar to the Cappadocian example. Use our free Doctor Match program to get connected with this distinguished specialist.