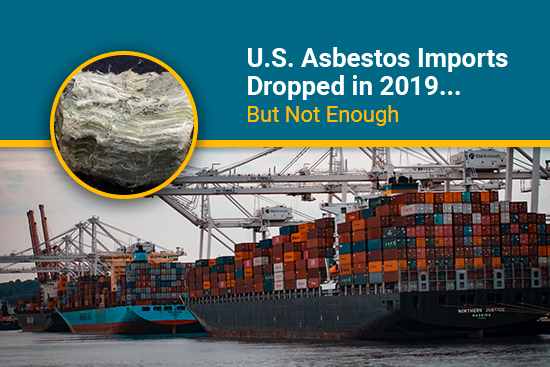 U.S. Asbestos Imports Dropped in 2019 … But Not Enough

Going back to the 20th century, the United States has imported hundreds, if not thousands, of metric tons of asbestos each year. The substance is a carcinogen and the only proven cause of mesothelioma.

Finally, in 2019, the U.S. significantly reduced how much asbestos the country brings in.

According to the U.S. Geological Survey Mineral Commodity Summaries report, the number dropped by nearly 600 tons compared to 2018. No longer can we say the U.S. imports “hundreds” — plural — which is a positive step toward eradicating asbestos from American households, businesses and more.

As Global Asbestos Awareness Week 2020 comes to a close, the U.S. importation numbers offer hope for eliminating mesothelioma as a health concern.

There’s still work left to do, though.

The amount for 2019 is by far the lowest of the last few years:

The U.S. gets asbestos from Brazil and Russia, with the former accounting for the large majority (96%) of imports. However, the only asbestos producer in Brazil “suspended mining activities” on Feb. 11, 2020, according to the Mineral Commodity Summaries. Therefore, the U.S. asbestos import stats could drop again in 2021.

The report states the U.S. consumed all imported asbestos in 2019 — and did so for the previous five years as well.

Work Left to Do for Asbestos Extinction

More than 60 countries have banned asbestos for commercial use. The U.S. is not on that list.

Recent legislative efforts to ban asbestos have stalled. The Alan Reinstein Ban Asbestos Now Act of 2019 is currently in the House of Representatives and Senate. There has been no progress for it since November 2019, and it currently resides in committee discussion.

According to the Mineral Commodity Summaries report, asbestos importation reached a high of 803,000 tons in 1973. The amount has been in gradual decline since, notably for health and liability concerns. In the latter half of the 20th century, the general public learned how dangerous asbestos is and connected it to cancers such as mesothelioma.

Despite the drop in imports, asbestos remains a health concern for many Americans. Most old homes, businesses and other buildings contain “legacy asbestos.” This term refers to commercial use of the substance in the 20th century when it was more acceptable.

As time passes, these homes and offices may need repairs or other construction work. Pulling apart panels, shingles, drywall, sheetrock, floor tiles or other building components could disturb legacy asbestos and send fibers into the air. Repairing or even touching old electrical wiring, insulation or pipes could also result in sharp threads breaking from the source.

The complete eradication of asbestos in the U.S. requires remodeling many old homes and businesses. Unfortunately, doing so could put many Americans at risk of mesothelioma. Wearing protective masks and using professional help is advised for asbestos-removal projects.

We at Mesothelioma Guide also urge all our readers to contact their representatives in Congress. Ask them to support the Alan Reinstein Ban Asbestos Now Act. If this becomes law, then the U.S. import totals will finally reach an acceptable amount: zero.