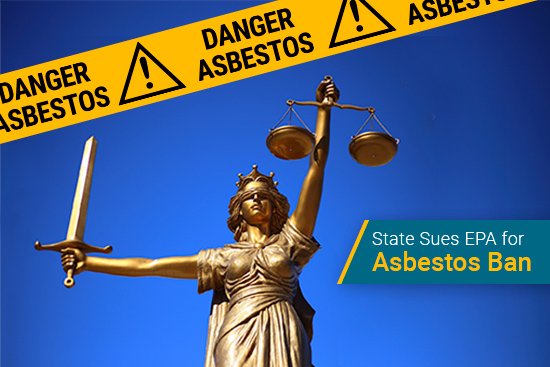 The Environmental Protection Agency’s wishy-washy attitude toward banning asbestos is now the subject of a lawsuit.

According to The Hill, a political news website, 11 attorneys general have joined together to force the EPA’s hand. They sued the agency for not effectively regulating asbestos.

Asbestos is a mineral composed of tiny fibers, which when disrupted can enter the air and become dangerous. People can inhale or ingest loose asbestos fibers, which later can cause the rare cancer known as mesothelioma. Despite the rising death toll attributed to this disease, the United States has not entirely banned asbestos from use in consumer goods.

California Attorney General Xavier Becerra wants that to change, saying that “asbestos is one of the most harmful and toxic chemicals known to humankind.” He provided a statement about the lawsuit, which California is a part of.

The Hill cited Becerra’s statement, which adds, “While it’s troubling that we must once again take the EPA to court to force the agency to do its job, we won’t pull any punches. There’s too much at stake to let the EPA ignore the danger that deadly asbestos poses to our communities.”

Current Asbestos Regulation in the U.S.

While asbestos manufacturing has all but halted in the country, asbestos is still imported into the U.S. from places such as Brazil. The EPA is conducting a review of asbestos’ dangers, with an expected end date of late 2019 or early 2020, before outright banning the mineral from all consumer use.

In April 2019, the EPA announced more restrictive asbestos regulations. The agency now requires companies to receive approval before using it, but critics of the decision say this caveat could allow for previously banned implementations of the substance. The agency looked worse after the New York Times reported that scientists working for the EPA wanted asbestos banned but were ignored.

The dangers of asbestos are known worldwide, and many countries have taken the action that the U.S. hasn’t. According to The Hill, more than 60 countries have outlawed asbestos.

The attorneys general for the suing states — and lawmakers, activists and residents across the country — want the U.S. to join the list.

Along with California, the states pushing the EPA for stronger regulation on asbestos are Connecticut, Hawaii, Maine, Maryland, Massachusetts, Minnesota, New Jersey, Oregon and Washington. The District of Columbia, which has its own attorney general as of 2014, is also part of the lawsuit.

This is not the only recent push for stricter asbestos laws. New Jersey banned asbestos earlier in 2019. The state is the first in the U.S. to completely outlaw all production of the mineral or use of it in consumer goods.

Also earlier this year, lawmakers in the House drafted an asbestos ban bill that would sidestep the EPA’s feet-dragging. The bill is titled House Resolution 1603 and would alter the Toxic Substances Control Act. If the bill is passed, the act would then “prohibit the manufacture, processing, and distribution in commerce of asbestos and asbestos-containing mixtures and articles, and for other purposes.”

The bill was referred in March to the Subcommittee on Environment and Climate Change. No further actions have occurred regarding the proposed law.

If the lawsuit from the 11 attorneys general works how they want it to, the bill won’t be necessary.