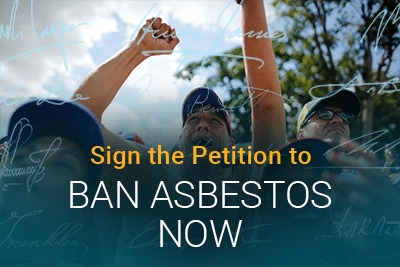 The Asbestos Disease Awareness Organization (ADAO) has started a petition to ban asbestos now. Asbestos is the only known cause of mesothelioma. The EPA has plans to review and regulate asbestos sometime in the next few years, but budget cuts may impact their plans. The ADAO is tired of uncertainty and wants the EPA to bypass protocol and completely ban asbestos as soon as possible.

The Petition to Ban Asbestos Now

The petition is titled “Ban Asbestos in the US Now, Without Loopholes or Exceptions.” The petition claims that the EPA could ban asbestos now by using existing research. The ADAO hopes for an all out ban on asbestos that will prevent any companies from finding a way to use it.

An estimated 15,000 people per year die from asbestos-related diseases, including mesothelioma.

Asbestos use has declined since the 1900s when it was widely used but it is still used in the United States. Asbestos related deaths are still an issue in modern day. The only way to prevent future deaths is to reduce asbestos exposure.

This year, the Centers for Disease Control (CDC) released data showing that yearly deaths from mesothelioma are still on an upward trend and have not peaked.

Last year, the Frank R. Lautenberg Chemical Safety for the 21st Century Act was passed into law to help the EPA regulate toxic substances like asbestos. Although the act is a big improvement from previous legislation, it still could be up to 5 years before asbestos is regulated. The goal of the petition is to urge the EPA to regulate asbestos immediately.

Timeline of Asbestos Legislation in the U.S.

The ADAO is an advocacy group for victims of asbestos exposure. Linda Reinstein and Doug Larkin founded the organization in 2004 after each of them had a loved one diagnosed with mesothelioma.

The organization has 3 goals: