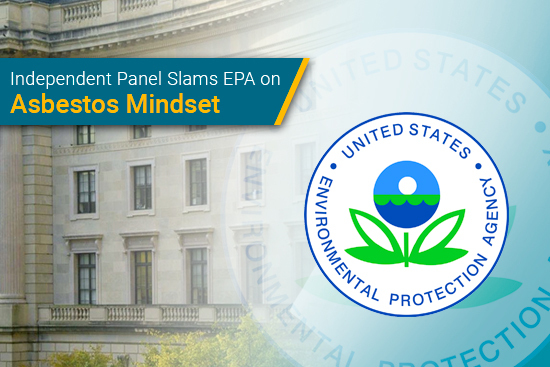 It’s far from the first time a scientific group has criticized the government agency regarding asbestos — and it certainly won’t be the last.

Earlier in 2020, the Environmental Protection Agency (EPA) published a “draft risk evaluation” regarding asbestos. This mineral is the only known cause of mesothelioma, which is diagnosed in around 3,000 Americans each year. Asbestos can also cause lung cancer and other non-cancerous, yet still serious, health issues.

The document focused solely on one type of asbestos out of six and ignored many of asbestos’ hazards. Many organizations scolded the EPA for these reasons.

The SACC’s 114-page peer review follows that trend, stating that the EPA evaluation for asbestos “was not considered adequate and resulted in low confidence in the conclusions.”

Issues With the EPA’s Asbestos Report

The EPA’s draft risk evaluation focused mainly on current uses of chrysotile asbestos and listed specific industries as having a higher-than-normal exposure risk. The industries highlighted in the report were:

The dangers of asbestos are not limited to those industries — not even close. The mineral was used for construction, insulation, electrical, and automobile repair and maintenance work through most of the 20th century. Those four were some of the most notorious uses of asbestos — and ones where lingering “legacy asbestos” remains an issue for workers.

For instance, chrysotile asbestos was used in around 95% of buildings constructed prior to the 1980s. Its presence remains in many old homes, office buildings and other structures throughout the country. People living in these buildings — or doing work on them — are at risk of exposure, which wasn’t highlighted in the EPA’s evaluation.

Widespread Criticism of the EPA

The Asbestos Disease Awareness Organization (ADAO) was one of the first activist groups to criticize the draft risk evaluation. ADAO president Linda Reinstein said the document “contains many flaws and numerous deadly exclusions” and will “perpetuate the dangers of asbestos and undermine chances for a ban.”

The ADAO and Reinstein have long pushed for a complete ban of asbestos in the United States. There is a bill in the House of Representatives that would enact a ban on commercial and industrial use of the mineral. While the proposed law has support, it has stalled in the legislative process since passing subcommittee vote last November.

Another criticism is only focusing on one type of asbestos. There are six main types, and while chrysotile is one of the most popular, it’s far from the only one that can cause mesothelioma.

The SACC said it “encourages the EPA to incorporate into the assessment other asbestos and asbestos-like fibers.” The SACC summarized that the “estimate for total exposure to asbestos is deficient,” while asking for an analysis of other conditions of use, such as asbestos in:

This draft risk evaluation isn’t the first time the EPA was the target of backlash regarding asbestos. In July 2019, California and nine other states filed a lawsuit against the EPA to push for stronger regulations on asbestos. The other states were:

Many organizations, including Mesothelioma Guide, have urged the EPA to take asbestos exposure more seriously. If the EPA backs a ban, it could get far more support in Congress and soon become a reality.

If you’re interested in stronger regulations regarding asbestos, you can contact the EPA directly and voice your concerns. You can also contact your government representative to inspire them to back a total ban of the mineral.