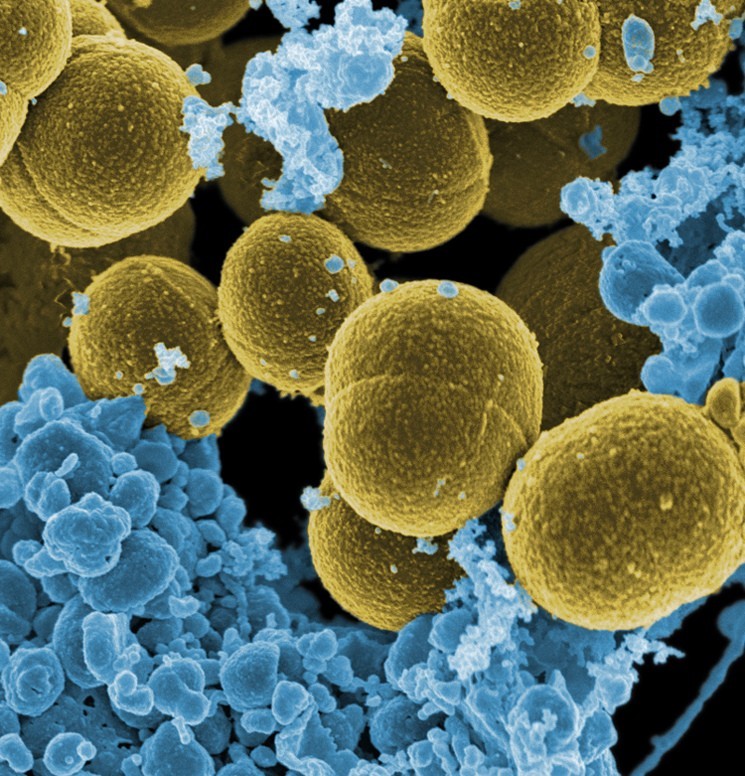 How Researchers Are Using Staph to Fight Mesothelioma

Fighting cancer with an infamous bacteria may seem counter-intuitive. But researchers have found a way to tame this deadly germ to attack an even deadlier disease—mesothelioma.

Most people are familiar with Staphylococcus aureus, often referred to simply as “Staph”, as the bacteria that causes many deadly infections in hospitals. The bacteria is actually quite common and usually lays dormant until something causes the immune system to falter, allowing the bacteria to proliferate. Estimates have suggested up to 20 percent of people carry the bacteria.

Researchers at the University of Western Australia have found a way to potentially use S. aureus to extend the lives of mesothelioma patients. They have achieved a reduction in tumors in mice infected with the mesothelioma by administering a biological compound derived from the bacteria.

A Brief History of Bacteria and Cancer

Doctors have collectively known that bacteria can be used to kill cancer cells for over a century. This was first discovered in the 1850s in Germany. It was discovered, as many medical advances are, accidentally.

There were two events taking place at the time that helped doctors see the potential of using bacteria to fight cancer. The first event was the observation that tumors infected with certain bacteria would shrink. This was a medical revelation. The second event was the recent success of the smallpox vaccine.

The result was the emergence of doctors attempting to produce cancer vaccines.

Of course, in the mid 19th century, the medical field lacked the technology to harness the power of bacterial drugs. The use of bacterial drugs also faced the inherent danger of deadly infections because, at this time, antibiotics weren’t invented yet. Penicillin wasn’t discovered until 1928.

Fast forward to a century later and developing drugs from bacteria had become a real possibility in treating diseases like mesothelioma. Today, we call this the field of immunotherapy.

Staph is frequently found in the respiratory tract of humans. Most cases of mesothelioma affect the lungs, which may have contributed to the logic of using the bacteria to treat the disease. The S. aureus compound has also shown potential for patients with peritoneal mesothelioma, the version of the disease affecting the abdominal region.

It turns out S. aureus doesn’t need oxygen to survive and this may be important to how the bacteria is effective. Studies have shown that these types of bacterias, ones that don’t require oxygen, may be instrumental in fighting cancerous cells. Bacterias that thrive in an oxygen-free environment are also noted for their ability to target specific cancerous cells.

The bacterial compound also activated T cells in the immune systems of the mice. T cells are responsible for killing harmful invaders like bacteria, but also unhealthy cancerous cells. It seems the introduction of the S. aureus bacteria alerts the immune system to also attack mesothelioma cells.

For now it remains to be seen if the S. aureus compound will translate into an effective treatment for human mesothelioma patients, but patients interested in this type of therapy don’t necessarily have to wait.

There are several bacteria that are currently being tested in clinical trials, such as an immunotherapeutic modification of listeria. The trial is being headed up by the National Cancer Institute and has already produced promising results. If you’re interested in getting involved, we can match you to an appropriate clinical trial.