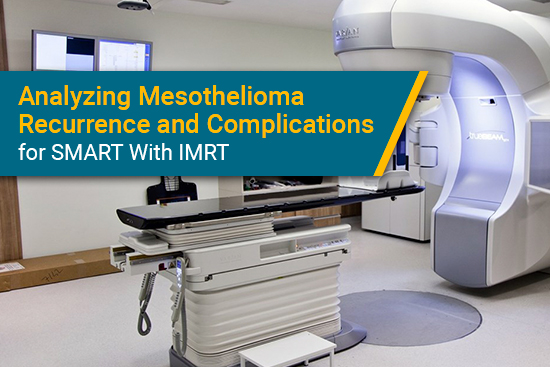 Analyzing Mesothelioma Recurrence and Complications for SMART With IMRT

Surgery, chemotherapy and radiation remain the three principal therapies for mesothelioma. Researchers and specialists continue to investigate the order of them.

A rising theory is that radiation before surgery might help patients the most, and more studies are investigating the merits of this belief.

A new report on The Lancelet website explores the post-surgery concerns for SMART, the acronym for “surgery for mesothelioma after radiation therapy.” SMART, which is used explicitly for pleural mesothelioma, developed at Toronto’s Princess Margaret Cancer Center. Dr. Elliot Wakeam brought the SMART protocol to Michigan Medicine.

The study details how often patients experience moderate or severe complications during or after surgery. The report also lists the percentage of patients who have a mesothelioma recurrence, meaning the cancer returned months or years after treatment ended.

What Are the Rates of Recurrence Following SMART?

For one year, from November 1, 2018 to October 31, 2019, 102 patients underwent SMART for pleural mesothelioma. The radiation method used was IMRT, the acronym for intensity-modulated radiation therapy. The surgery used was extrapleural pneumonectomy, which involves removing the lung closest to the original tumor site.

Around 63% of patients experienced mesothelioma recurrence within five years. Half of the recurrence events occurred in the “contralateral lung,” which is the lung opposite where the cancer formed. This would be the only remaining lung after the other was taken out.

How Often Did Surgical Complications Occur?

Nearly half the patients (47) experienced grade 3 or grade 4 complications within 30 days after extrapleural pneumonectomy. One patient died in that time frame due to grade 5 pneumonia.

The percentage is high, but it could be due to the methods used. Extrapleural pneumonectomy, shortened to EPP, can lead to complications due to removing an organ. IMRT can impact healthy tissue in the thorax due to “excess” radiation beams, and with only one lung remaining, any damage to that organ’s tissue is significant.

What Alternatives Are Available for SMART?

There are alternatives to both the surgery and radiation methods analyzed in this study. They both could prevent the rates of complications and recurrence for SMART patients.

For surgery, an often-used option is pleurectomy with decortication (P/D). This operation removes the pleura, which is a thin lining between the lung cavity and chest wall. The pleura is where pleural mesothelioma forms. P/D spares the nearby lung, which reduces complications from having just one of this vital organ.

SMART with P/D is referred to as “SMARTER.” We will explore this protocol in a future blog.

Proton beam radiation is a safer alternative to IMRT. This method sends a more targeted radiotherapy to the target site, reducing excess waves and damage to outlying healthy tissue. Proton beam radiation also allows for higher doses of the therapy, which allows oncologists to target more of the outlier disease and reduce the chances of recurrence.

Proton beam radiation might not be feasible for SMART, but it could be utilized if the treatment advances in speed.

Mesothelioma patients shouldn’t write off SMART as an emerging protocol. In fact, The Lancelet study shows potential for improvements.

Anyone interested in learning about SMART for their mesothelioma diagnosis should contact our medical support team at information@mesotheliomaguide.com.