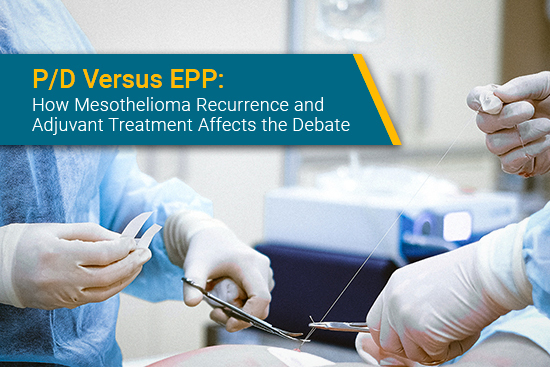 P/D Versus EPP: How Mesothelioma Recurrence and Adjuvant Treatment Affects the Debate

There’s an ongoing discussion about which surgery is best for pleural mesothelioma. Is it better to remove a lung with extrapleural pneumonectomy (EPP)? Or is the less-invasive pleurectomy with decortication (P/D) more manageable for patients?

That debate surely won’t end anytime soon — with mesothelioma specialists holding firm on each side — but a recently published article details why less is usually more for mesothelioma surgery.

Dr. Raja Flores, the head of thoracic surgery at Mount Sinai Medical Center in New York, authored the paper. He explained the disparities in mortality and survival between the two surgeries, and how recurrence and second-line treatment factors into the discourse.

“The big question is whether or not it’s worth doing an extrapleural pneumonectomy,” he said. “What we’re finding is the most important thing is to preserve that lung.”

Dr. Flores concludes the paper by stressing the importance of staging, which can dictate the surgery used and dramatically improve a patient’s prognosis.

Old-School Thinking for P/D and EPP

EPP removes the affected lung, leaving just one lung in the patient’s body. The lack of two lungs leaves patients vulnerable to breathing difficulties, blood clots and pneumonia. This surgery also makes the remaining lung extremely important — and any tumors or other diseases reaching the organ are life-threatening.

The debate between P/D and EPP usually revolves around the stages of mesothelioma. Traditionally, the earlier stages (stages 1 and 2) are better for P/D because the disease is less likely to have reached either lung. The tumors are confined to the lining, diaphragm and pericardium. Doctors feel P/D will eliminate most, if not all, tumors.

The later stages (stages 3 and 4) appear, in theory, better for EPP. These stages are more likely to involve tumors on at least one lung. The thinking is P/D in these stages isn’t curative enough, whereas the more aggressive EPP addresses a higher percentage of the tumors.

Dr. Flores analyzed this thinking and concluded differently than historical belief. He believes P/D is better than EPP “across all stages.”

“We thought that maybe for stage 3, EPP would be better,” he continued, “but that wasn’t true.”

In early stages, yes, Dr. Flores said “it’s overkill” to perform an EPP. Even in later stages, though, he explained that EPP is often too much of “a hit on (patients’) quality of life.”

The general survival results show potential benefit from both surgery options. A study of 183 patients who underwent extrapleural pneumonectomy revealed a median survival of 19 months. However, 50% of them experienced lingering complications. In Dr. Flores’ research, pleurectomy with decortication often yields similar survival times and fewer health issues following the operation.

Dr. Flores and his team reported that 30-day mortality (death) due to surgery is higher for EPP than P/D. In fact, across nearly 3,000 patients who had one of the two surgeries, the risk difference is more than double:

Mesothelioma isn’t made up of just one large, ever-growing tumor. It’s many microscopic tumors that spread like an avalanche. Removing all of them in surgery is challenging.

The best way to treat mesothelioma is with a multimodal approach. Doctors recommend surgery, chemotherapy and radiation together. The thinking is surgery can remove most tumors while the other two methods address remnant tumors.

“When patients have two lungs, they tolerate chemotherapy, targeted therapy and radiation therapy better,” he said. “When you have one lung, those therapies hit hard. You sometimes can’t tolerate the adverse effects and can’t finish the therapy.”

Frequency of Mesothelioma Recurrence After Each Surgery Type

Recurrence is all too common for mesothelioma. The nature of this cancer — the microscopic tumors that go unnoticed and unaddressed during the first treatment regimen — leave the body susceptible to a return of malignancy.

Leaving both lungs in place allows patients to respond better to a recurrence, as Dr. Flores reported. In an EPP study, 57% of patients experienced a recurrence of their pleural mesothelioma. Most involved the lung cavity, while some occurred in the abdomen.

P/D patients experience a similar recurrence rate, but nearly all of the instances involved the lung cavity. With both lungs intact, patients can handle treatment to address the malignant return.

The same isn’t always true for patients after EPP. Considering the high rates of complications, people may not be healthy enough to endure treatment for a recurrence. Add in that after EPP, only one lung remains.

“The recurrence sometimes occurs in the other lung,” Dr. Flores said. “So now you’ve painted yourself into a corner. You have no reserves.”

Choosing Between P/D and EPP

Neither surgery is best for every patient. While most patients may benefit from a less-aggressive approach, some may need EPP due to the broad scope of their mesothelioma.

This is why accurate diagnosing and staging is necessary. Patients and doctors need a correct understanding of the disease, including whether it has reached the lung.

This data also stresses the importance of finding an experienced surgeon, especially one who has often performed P/D. You may hear from a general oncologist that your cancer is too advanced for P/D, but a surgeon at one of the top cancer centers might feel differently. Getting a second opinion on surgery could avoid having a riskier treatment than is necessary.

If you have pleural mesothelioma and want to find such a surgeon or cancer center, contact our team. Our patient advocate and registered nurse, Karen Ritter, can assist you through the process. Email her at karen@mesotheliomaguide.com.