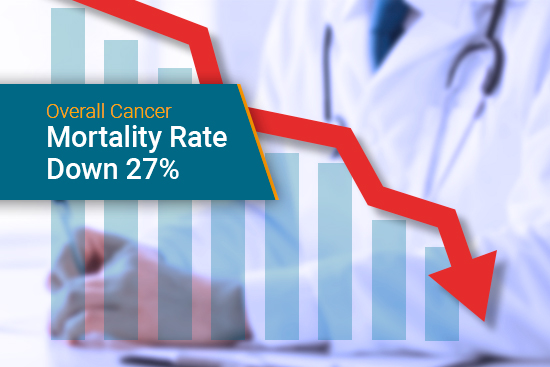 According to the American Cancer Society’s annual Cancer Statistics Report, the overall mortality from cancer in the United States experienced a steady decline between 1991 and 2016.

This does not mean that the number of cancer deaths is anywhere near a desirable level. In 2019 there are still expected to be 1,762,450 newly diagnosed cases and 606,880 cancer deaths. A staggering number of cases; many of which are less responsive to current treatments and are associated with a poorer prognosis like brain, heart, or mesothelioma cancer.

Researchers are now attempting to determine a cause for this overall decline in mortality for cancer patients. One factor is the sharp decline in smoking, as well as other unhealthy activities and dietary habits among people in affluent counties in the U.S.

However, the rate of preventable cancer has increased by roughly 35% in poorer counties since the 1970s and suggests that there is a link between widening socioeconomic gaps and cancer mortality in this country. The lack of access to certain diagnostic and treatment methods in these counties has added to the increase in mortality over the last three decades.

On this point, the authors of the Cancer Statistics Report wrote:

“Some states are home to both the wealthiest and the poorest counties, suggesting the opportunity for more equitable dissemination of effective cancer prevention, early detection, and treatment strategies. A broader application of existing cancer control knowledge with an emphasis on disadvantaged groups would undoubtedly accelerate progress against cancer.”

How These Statistics Affect Mesothelioma

For mesothelioma, which is generally less responsive to treatment, incidence and mortality have remained level since asbestos is still used for certain applications. This is caused by the challenges involved in detecting and diagnosing the disease, and the longer than normal latency period of mesothelioma compared to other types of cancer.

Low-income counties in states that support major asbestos-related industries including mining, shipbuilding, manufacturing, and power production often experience a higher than average incidence of mesothelioma. This is due to asbestos exposure at work, in the home, or from natural mineral deposits, made worse by the lack of access to adequate medical care.

Researchers are confident that the rates will continue to fall as work to improve early detection and treatment techniques carries on, especially for rare and aggressive cancers like mesothelioma. Currently, for patients diagnosed with mesothelioma, these developments have greatly improved life expectancy and while incidence has remained constant, the survival rates have shown significant improvement.

Breakthroughs in new treatments like immunotherapy as well as improved chemotherapy and radiation therapy procedures have given patients with mesothelioma more optimistic prognoses and have started to restore hope for remission and recovery.

If you have been diagnosed with mesothelioma and have any questions about available treatment options, or ways to help improve your prognosis, contact our registered nurse on staff, Karen Ritter, RN. You can reach her by calling 888-385-2024 extension 102, or by emailing karen@mesotheliomaguide.com.