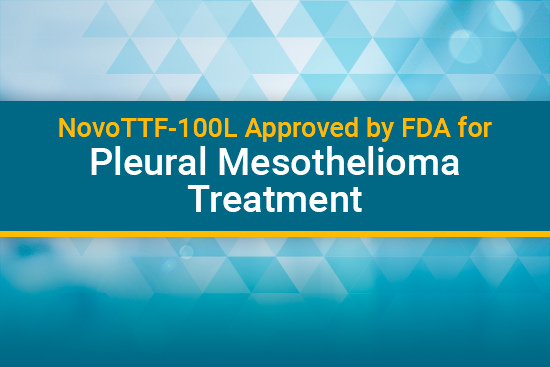 For the first time in more than 15 years, there is a new treatment for Americans who have mesothelioma.

Better yet, the favorable trial results for this treatment indicate it could save thousands of lives.

The U.S. Food and Drug Administration approved NovoTTF-100L System for frontline treatment of specific types of pleural mesothelioma. According to Novocure, the developer of the treatment, the FDA approved it for “locally advanced or metastatic malignant pleural mesothelioma” and only when surgery isn’t an option. The treatment must also be combined with pemetrexed (generic name for Alimta) and platinum-based chemotherapy. Novocure announced the news via press release Thursday, May 23, 2019.

There are few FDA-approved options for patients with this rare disease, which approximately 3,300 Americans are diagnosed for each year. Prior to this approval, pemetrexed plus cisplatin was the only FDA-approved treatment for pleural mesothelioma. In 2004, the FDA approved pemetrexed for mesothelioma treatment — and hadn’t given the green light to another treatment again until Thursday.

According to Bill Doyle, Novocure’s executive chairman, the company has worked on the NovoTTF-100L project since 2000. He added that the FDA’s approval of the device “marks a major milestone for Novocure.”

The FDA’s approval is based on results from the STELLAR clinical trial. According to Novocure’s press release, 80 participants received NovoTTF-100L plus chemotherapy. The median overall survival of participants using NovoTTF-100L was 18.2 months. For epithelioid mesothelioma patients, the average survival was approximately 21 months. For non-epithelioid patients — sarcomatoid and biphasic — the survival length was around 12 months.

Of the trial’s 80 enrolled participants who used the NovoTTF-100L plus chemotherapy, around 62% were alive at one year. By comparison, the percentage of one-year survival for pleural mesothelioma patients in general is 40%.

The disease control rate in the NovoTTF-100L study’s participants was an astounding 97%, and 40% of patients had a partial response, meaning their cancer reduced slightly in size. Around 57% had a stable disease, meaning their cancer had not shrunk or grown. Considering how aggressive pleural mesothelioma is, these results are very encouraging.

According to Mary Hesdorffer, executive director of the Mesothelioma Applied Research Foundation, mesothelioma patients who aren’t eligible for surgery have few promising options. She added in Novocure’s press release that “NovoTTF-100L provides unresectable MPM patients with a treatment option that may improve survival.

“We are encouraged by the FDA approval,” she continued, “and hope it is just the beginning of innovation in the treatment of this aggressive disease.”