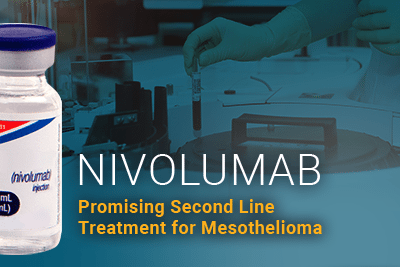 In a recent trial, researchers discovered that the drug nivolumab may be a new treatment option for patients with malignant pleural mesothelioma. If nivolumab is given alone or combined with the drug ipilimumab, researchers believe it can help control a patient’s mesothelioma and may extend their survival.

What the Study Entailed

125 patients were enrolled in the trial. All of the patients that participated had unresectable malignant pleural mesothelioma that had advanced after receiving 1 or 2 lines of therapy.

The patients in the study were randomly assigned to 2 groups.

Both nivolumab and ipilimumab are drugs that help your immune system to attack cancer cells that are inside your body. The drug ipilimumab is typically used to treat skin cancers.

Every 12 weeks, patients were given a CT scan. After being assessed, they were able to stay in the clinical trial if their disease had not progressed.

70% of patients in the trial were able to go through 6 cycles of treatment.

During the trial the commonly reported side effects were

The side effects reported by patients were described as being mild. However, researchers noted that the side effects were more severe in patients that had received the combination of nivolumab and ipilimumab.

What the Study Unveiled

In 12 weeks, researchers discovered that tumor shrinkage had occurred in patients.

Lead of the study was Arnaud Scherpereel, MD, PHD. Scherpereel is head of the Pulmonary and Thoracic Oncology Department at the University Hospital (CHU) in Lille, France. He presented the findings of the MAPS-2 trial to the attendees at the 2017 American Society of Clinical Oncology (ASCO) ASCO Annual Meeting.

Annually, more than 30,000 oncologists gather at the ASCO Annual Meeting to discuss treatments, therapies, and other controversial topics in their field of expertise.

According to Scherpereel, “Patients from both arms of this study seem to have prolonged median overall survival compared to all previous reports in this setting.”

The Future of Nivolumab

Researchers hope that nivolumab, or the combination of nivolumab with ipilimumab, may someday become a proven second-line or third-line treatment method for pleural mesothelioma.

By next fall, researchers anticipate to collect more data from the MAPS-2 trial, including more information about mature survival, quality-of-life, and biomarker data.