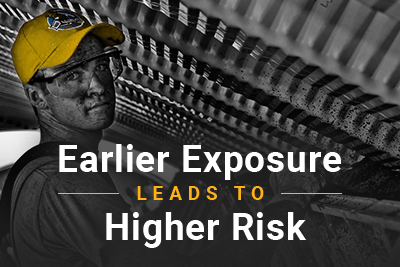 Mesothelioma is More Likely in Workers Exposed to Asbestos Earlier

A new study revealed that individuals who are exposed to asbestos earlier in their career are at a higher risk of developing pleural mesothelioma.The study published in the BMJ Occupational & Environmental Medicine journal also states that individuals who are exposed to asbestos later in their career or are exposed at a constant level over their entire working career, are at a lower risk of developing pleural mesothelioma.

During the study, researchers analyzed medical record data of 1,196 male patients from the years of 1987 to 2006 and 2,369 age-matched control individuals. Cases of mesothelioma are significantly higher in men than in women. 80 percent of reported mesothelioma cases are men.

The study compared the risks of developing pleural mesothelioma to the amount of asbestos exposure that individuals had experienced while in their workplace environment.

“We found that an increase [in asbestos exposure] occurring more than 40 years before diagnosis, or at 15–20 years old, had the strongest impact on the risk of PM,” researchers commented.

Yearly, in the United States, there are about 2,000 to 3,000 people who are diagnosed with mesothelioma. Pleural mesothelioma makes up about 75 percent of those cases.

Researchers also discovered that “…subjects who accumulated asbestos fibres in early career were at higher risk than those who accumulated them at the end of their career or at a constant level over the entire career.”

Occupational exposure is the most common form of asbestos exposure. Asbestos was used in many work environments because of its strength and heat resistance.

Over 125 million people have been exposed to asbestos during their lifetime while being in their workplace environment. One of the largest groups that has been affected is military veterans.

Asbestos still isn’t officially banned in the United States and it still poses a threat in many workplace environments. However, unlike in the past, many occupations have now placed safety regulations to protect their workers.

If you have been diagnosed with mesothelioma due to being exposed to asbestos in your workplace environment, you are a victim of a crime. Many companies that used asbestos-containing products were aware of the health risks that were associated with it and chose to not tell their employees.

Compensation helps patients during this difficult time. It allows patients to have a peace of mind while they are seeking medical treatment and it helps them to financially secure the future of their family.