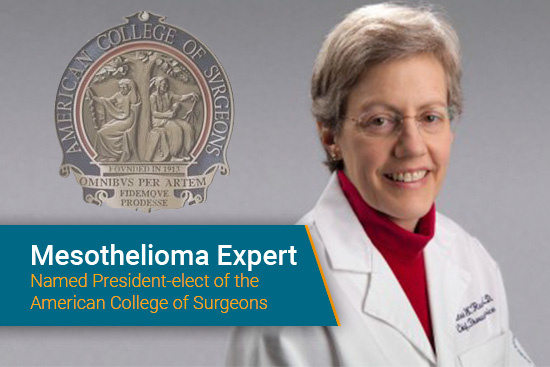 Mesothelioma Expert Named President-elect of the American College of Surgeons

In October, Dr. Valerie Rusch, MD, FACS, an attending thoracic surgeon at Memorial Sloan-Kettering Cancer Center, an ACS Fellow, and mesothelioma expert, was elected president of the American College of Surgeons (ACS) for the 2018-2019 term.

In addition, Dr. Rusch has been closely involved with the American Joint Committee on Cancer (AJCC) for the last 15 years where she helped to publish the sixth and seventh editions to the cancer staging manual. The most recent publication of the eighth edition of the AJCC Staging Manual includes several chapters on thoracic surgery authored by Dr. Rusch herself.

The most notable change made to the new staging system is the differentiation between stage III and stage IV disease. In order to mitigate some of the psychological toll a stage IV diagnosis takes on a patient’s morale, Dr. Rusch explains:

“For instance, right now, anything that’s stage T4 is considered stage IV disease, and stage IV disease for any patient automatically means ‘the end of the road.’ That’s now been moved to stage IIIb, and only metastatic disease is stage IV.”

Giving patients more hope, especially at advanced stages, is essential to improving their prognosis. It also gives patients, who previously were not candidates for treatment due to their stage IV diagnosis, the opportunity to receive treatment previously not administered to patients with cancer so advanced.

Her specialty is diagnosing and treating patients with lung cancer, as well as cancer of the esophagus, chest wall, mediastinum, and most notably, the pleura in the form of Malignant Pleural Mesothelioma. Along with this, Dr. Rusch was among the first few women to be a full board certified thoracic surgeon in the United States.

With the extensive research that has been conducted over the last few decades on mesothelioma, many doctors today, including Dr. Rusch, are favoring multidisciplinary approaches to treatment. By combining different fields of treatment and diagnostic methods, patients are given the best possible chance for a cure.

In her 30 years of experience, she has emphasized the importance of furthering research into minimally invasive treatments as well as the understanding of molecular behavior of asbestos cancers.

Dr. Rusch specializes in the EPP and the P/D procedures for the removal of mesothelioma tumors from around the lungs. The P/D surgery is becoming favored among surgeons because patients tolerate recovery better and have fewer complications. This is a focus for Dr. Rusch, as her mission during her time at Memorial Sloan-Kettering Hospital has been to develop treatments that require a minimally invasive approach.

To read more about Dr. Valerie Rusch, visit her doctor page or contacting our Patient Advocacy Nurse, Jenna Campagna, RN, for any further questions. You may reach her by calling 888-385-2024 extension 102 or by emailing: jenna@mesotheliomaguide.com