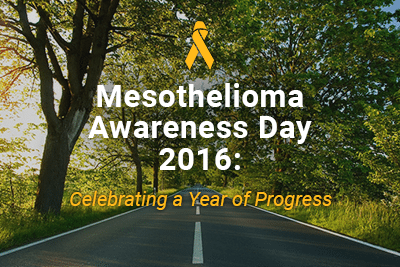 September 26th is recognized as National Mesothelioma Awareness Day. This awareness day was created by the Meso Foundation in 2004. This year will mark the twelfth year of this nationally known day.

Between 2,000 to 3,000 cases of mesothelioma are reported in the United States each year. On this day, citizens and those directly affected by mesothelioma will band together to bring awareness about this rare cancer.

Each year there is progress towards banning asbestos and curing mesothelioma. 2016 has showcased great success to the mesothelioma community. 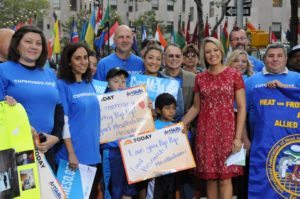 For some, it is a yearly tradition to attend the taping of the Today Show. Many people will gather at the Rockefeller Center in New York holding mesothelioma awareness and mesothelioma warrior signs.

Don’t worry if you can’t make it to the Today Show, there are other ways that you can show your support.

Top 3 ways you can participate in National Mesothelioma Awareness Day

Out with the Old: Recent Progress in The Fight to Ban Asbestos

The leading cause of mesothelioma is asbestos exposure. Even though asbestos regulations began in the 1970s, it is not yet banned in the United States. Asbestos is a fibrous mineral that is extremely durable and a good heat conductor.

Recently there have been new wave approaches towards banning asbestos.

Later this year, the EPA will be selecting the first 10 chemicals to evaluate under the Toxic Substances Control Act. Anti-asbestos activists have high hopes that asbestos will be considered as one of the chemicals picked by the EPA. Among these activists is Senator Barbara Boxer of California who has written a letter to the EPA urging them to put asbestos on the list.

In with the New: Mesothelioma Research Highlights of 2016

A lot of medical milestones have also occurred since the last National Mesothelioma Awareness Day.