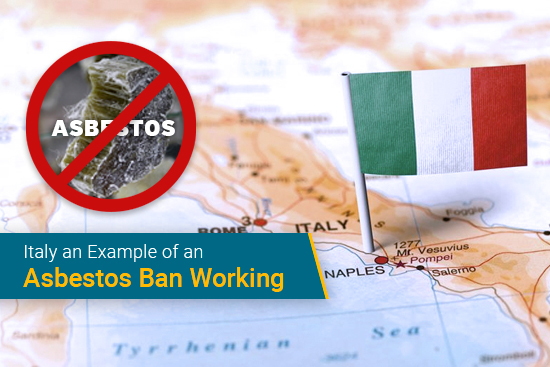 Italy an Example of an Asbestos Ban Working

The United States has flirted with the idea of banning asbestos for more than 30 years. The topic comes and goes and comes, currently in the in‑between phase after getting strong consideration last fall in the U.S. House of Representatives.

What type of effect would banning asbestos have in curtailing asbestos diseases, most notably mesothelioma?

Well, Italy serves as a prime example of exactly why countries like the United States should ban asbestos.

An article published in the JAMA Network shows how mesothelioma incidence has risen globally since 1990. It also shows how Italy’s mesothelioma rates have dropped since the country banned asbestos in 1992.

Unfortunately, many countries don’t ban asbestos. This leads to a slow and steady rise of mesothelioma rates globally.

Cases continue to affect the elderly more than any age group. Nearly 45% of cases involve people age 70 and older. This percentage increased from 1990 to 2017. Only 13.75% of cases were people younger than age 50.

Why Mesothelioma Rates Take So Long to Decrease

The article expresses that incidence and rates “began to decrease after 20 years of a complete ban on asbestos use.”

The reason for this is the latency period. Mesothelioma develops at least 20 years after asbestos exposure occurs. The fibers usually sit dormant within the tissue for multiple decades, slowly irritating the cell linings. This can lead to cell replication and eventually the formation of tumors.

So it takes at least 20 years to see any benefit from an asbestos ban. That’s what happened in Italy and should be similar in the United States.

Where the U.S. Stands With a Ban

The House of Representatives considered the Alan Reinstein Ban Asbestos Now Act of 2020 last year. It passed subcommittee and committee hearings. However, the bill was pulled from the agenda at the last minute.

It hasn’t resurfaced in House of Representative action items since then. The hope is it receives approval soon and gets a swift vote from the U.S. Senate. The longer asbestos remains unbanned, the more likely companies can receive allowances to use the cancerous mineral. There are regulations against asbestos currently but exceptions for use on a case‑by‑case basis.