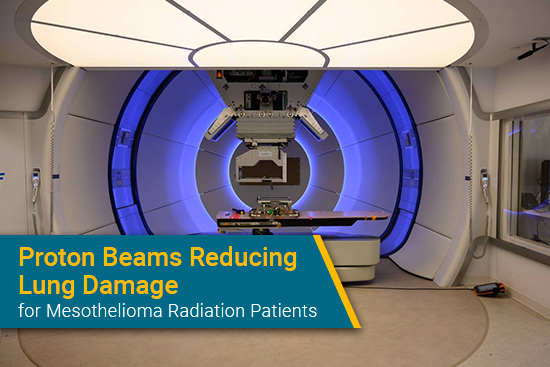 Those are the revelations from a recent consensus statement on proton radiation therapy in pleural mesothelioma. The report, a 37-page document written by 16 radiation experts spanning 12 hospitals, examines the benefits and drawbacks of each radiation approach.

The conclusion? Proton radiation is the recommended approach.

We at Mesothelioma Guide interviewed Dr. Charles Simone, the chief medical officer of the newly created New York Proton Center. He’s also one of the 16 authors for the consensus statement, which has been in the works since 2017. He provided context on why proton radiation therapy is so beneficial in combating pleural mesothelioma — and why, most importantly, it’s the safest radiotherapy option.

“I think radiation is coming back in favor.”

If you’d like to visit the New York Proton Center for mesothelioma radiation therapy, please contact our team. Patient advocate and registered nurse Karen Ritter can assist you in setting up an appointment with Dr. Simone and his staff. Please email Jenna at karen@mesotheliomaguide.com.

Mesothelioma Radiation and the Effect on the Lungs

The long-standing issue with mesothelioma radiation is the therapy can damage healthy tissue, even that of essential organs. Traditional photon radiation, and even the more-targeted and more-effective intensity-modulated radiation therapy (IMRT), can lead to a condition called pneumonitis.

That lung is essential to long-term survival and quality of life for mesothelioma patients. There are two primary surgeries for this type of mesothelioma: extrapleural pneumonectomy (EPP) and pleurectomy with decortication (P/D).

EPP removes the nearby lung from the body. P/D spares the lung and primarily focuses on removing the pleura, which is the narrow space near the lung where this cancer forms.

If a patient undergoes EPP, then the health of the remaining lung is vital. Even after P/D, radiation therapy must be directed on or close to the ipsilateral lung. At least some tissue damage is nearly a foregone conclusion.

At high doses, radiation oncologists have difficulty reducing damage to the contralateral lung with traditional radiation and IMRT. According to the consensus statement, which cites multiple studies:

“The problem historically has been it’s harder to deliver radiation for mesothelioma because it’s a big area,” Dr. Simone said. “We need to treat the entire hemithorax. … We usually can’t deliver that high of a dose with traditional radiation, even photon radiation or IMRT.

“We either underdose the tumor or lower the dose we are prescribing. Both of those can lead to lower control rates.”

Proton radiation is the next evolution in this treatment. The proton beams limit excess radiation to surrounding tissue and organs, allowing radiation oncologists to deliver higher doses to the mesothelioma tumors.

The pneumonitis rates for proton radiation were lower than those of traditional photon radiation. This is while using the same dose for treatment.

In addition to the contralateral lung, radiation can damage tissue on or in the:

All of this is evidence that proton radiation can deliver life-extending, tumor-killing effects while minimizing severe side effects. A shift to using this form of radiotherapy seems inevitable in the years to come.