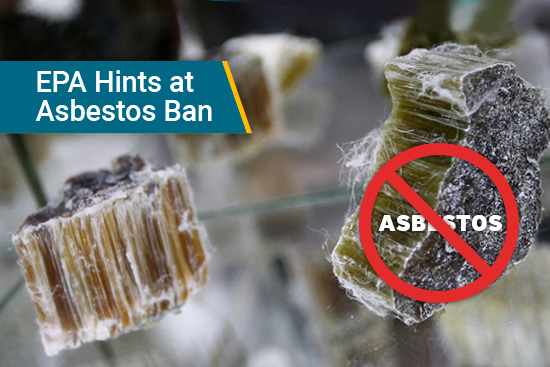 Officials with the Environmental Protection Agency (EPA) felt they took a step forward last week when they announced a new rule regarding asbestos regulation. When anti-asbestos activists responded with criticism, an agency spokesperson signaled the rule may just be an appetizer.

Alexandra Dapolito Dunn, assistant administrator of the agency’s Office of Chemical Safety and Pollution Prevention, told The Hill that asbestos might soon be banned entirely in the United States. Despite the substance’s health risks, the U.S. has yet to do join the long list of countries already with bans in place.

Asbestos is directly linked to mesothelioma, a rare and aggressive cancer for which there are few treatment options. The mineral is found in insulation, automobile brakes, ceiling tiles, military ships, cement piping, drywall mud and more items associated with construction. For the majority of the 20th century, asbestos was used with little to no U.S. government regulation. Only after scientists connected asbestos exposure to numerous diseases, including mesothelioma, were regulations made to limit the substance’s use.

Dunn’s statement regarding a complete ban of asbestos follows one made a few days earlier regarding a new regulatory measure involving the mineral. In 2016, Congress amended the Toxic Substances Control Act to task the EPA with creating a process for regulating asbestos use in domestic and imported consumer goods.

As part of the agency’s effort to revamp the regulatory process, it may have opened the door for increased asbestos use.

Representatives with the EPA announced its most recent significant new use rule regarding asbestos would close a dangerous loophole. Due to a decades-old law, officials said some discontinued uses of asbestos were beyond the EPA’s oversight. The new ruling forces manufacturers to seek EPA approval before resuming the manufacturing or importation of certain asbestos-inclusive products. Therefore, manufacturers looking to reintroduce these items into the marketplace must pass a federal review first.

According to a New York Times report, Dunn said the ruling will “close the door” on almost all unapproved asbestos uses in the country. Nancy Beck, the principal deputy assistant administrator for the Office of Chemical Safety and Pollution Prevention, told The Hill that the ruling is a positive step forward for “public health protection.”

However, the ruling places the fate of many asbestos-inclusive products within the EPA’s judgment. Critics of the decision believe the agency now has the authority to approve products that were otherwise banned. In a case-by-case regulatory process, there is no way to foresee whether the EPA will allow more or fewer companies to use asbestos compared to before the ruling.

Additionally, the ruling does not cover the importation of raw asbestos. Linda Reinstein, the president of the Asbestos Disease Awareness Organization, told The New York Times that raw asbestos is often used in the chlorine industry. She called the new ruling “toothless.”

Is a Complete Asbestos Ban Coming?

Some experts feel the EPA should advocate for an outright ban of all asbestos-inclusive products — and anything short of that is disappointing. A complete ban of asbestos removes all questions related to whether harmful use of the substance could slip through the cracks of the agency’s regulatory system.

There is a proposed asbestos ban in Congress, but the bill is currently in subcommittee and many actions away from becoming law.

Melanie Benesh, an attorney with the Environmental Working Group, said to The Hill that banning asbestos is the lone solution to ensuring “industry will never again be able to use this dangerous material.” Reinstein echoed that sentiment in a statement to The New York Times.

“More than 60 nations around the world have put public health before private profits and banned asbestos,” she said. “Americans deserve the same from our government.”

However, Dunn said the EPA cannot enforce a total ban of asbestos. The EPA only has the power to enforce bans of specific types of products or review products on a case-by-case basis.

“We don’t have the authority to go directly to a ban,” Dunn said to The Hill. “We have to evaluate risk; EPA has to follow the law.”

The EPA could suggest a complete asbestos ban to Congress. When Congress tasked the agency with formulating a regulatory process, it also requested a general risk assessment of the mineral. The evaluation will conclude toward the end of 2019, Dunn said, and the agency could use its regulatory power to enact an informal asbestos ban while Congress works toward an official one.

“If there is any unreasonable risk, the EPA will regulate,” Dunn said, “and our regulation could take the form of a ban.”

If Dunn’s words are any indication, 2019 could be the year the U.S. finally bans asbestos.