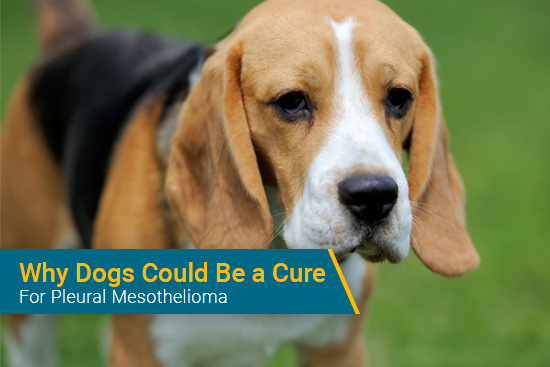 Why Dogs Could Be a Cure for Pleural Mesothelioma

A new study suggests dogs — not needles or drugs — could be the first line of defense in stopping one type of this disease.

According to the Journal of the American Osteopathic Association, trained beagles might help with early detection of non-small-cell lung cancer. The study was conducted by the Lake Erie College of Osteopathic Medicine in Bradenton, Florida. The researchers used three beagles in the double-blind test, and the results are astonishing.

The three dogs’ total sensitivity for detecting non-small-cell lung cancer was 96.7%. The combined specificity was 97.5%. And the predictive power of the three canines was above 90%.

The study was specific to non-small-cell lung cancer, but jumping to pleural mesothelioma isn’t a stretch. The two are both types of cancer — and share other similarities.

However, this study proves it can be done. Dogs have much stronger scenting abilities than humans. Beagles, in particular, are exceptional at scenting. They have 225 million olfactory receptors — which are used for scenting — compared to the 5 million that humans have.

How the Dogs Were Trained to Detect Cancer

We already know that dogs can help mesothelioma patients feel better, but now they could help them put the disease in the past. How were the dogs trained, though?

To accurately test the dogs’ cancer-detection skills, researchers used blood serum samples from people diagnosed with non-small-cell lung cancer and from people who did not have the disease.

Testers started the study by training the three beagles to react when it picked up the scent of a cancerous serum. The examiners used five evenly spaced canisters, with four containing healthy serum and one containing the cancer sample. To improve the beagles’ motivation and help them learn when to identify a scent, the testers used a clicker sound and training treats.

(Note: There was a fourth beagle involved at the beginning of the study, but the dog was unmotivated by the training treats and did not respond to any training methods. He/she is still a good boy/girl in our view!) 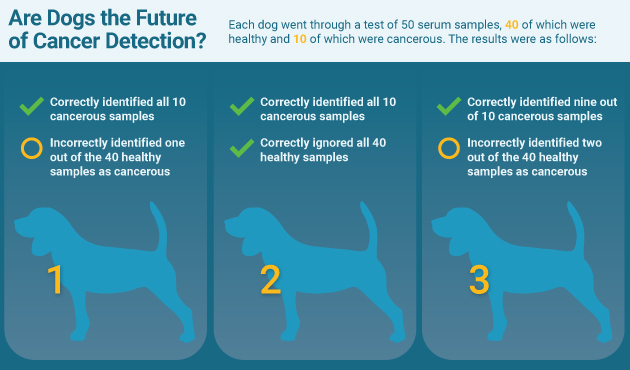 Details of the Study

Safe to say those dogs deserve many more treats.

The researchers involved in the serum study conducted a second cancer-detection test involving dogs. They used breath condensate samples from patients’ facemasks, and the beagles appear just as successful in detecting lung cancer through a person’s breath. If these smart, good dogs can uncover a mesothelioma biomarker from blood or breath, then hopefully doctors can do the same.

According to the article on the Journal of the American Osteopathic Association website, the results “provide a starting point for a larger study” that will identify scentable biomarkers present in cancerous serum samples. The article then states, “Further investigation … could provide a foundation for the development of a highly sensitive, specific, and cost-effective method for early cancer detection.”

As of now, the scientifically approved method for detecting and diagnosing mesothelioma involves numerous tests. Patients start with an X-ray, followed by more advanced imaging tests. If the doctor suspects mesothelioma is present, then the patient will undergo a tissue biopsy.

Testing could take weeks, and many doctors are ill-prepared to diagnose mesothelioma due to the rarity of the disease. For that reason, many people who have mesothelioma are misdiagnosed and begin treatment too late.

Any additional detection methods — even one that started with a beagle’s nose — is welcomed.

Even if you don’t have the disease and are simply inspired by these good pups, you may be needed as a control sample in mesothelioma testing. Email our patient advocate, Karen Ritter, at karen@mesotheliomaguide.com for information on how to help the science community fight this cancer.