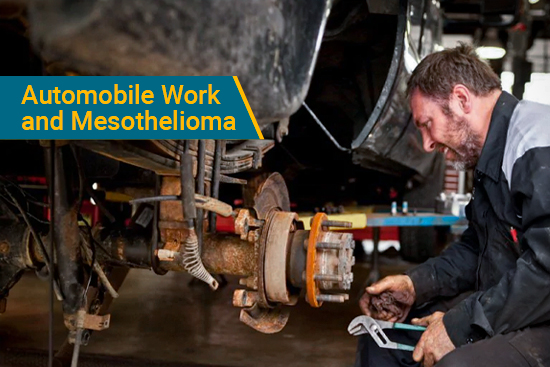 Have you ever thought of automobile brakes as a source of asbestos exposure and occupation linked to mesothelioma?

If not, then it’s time you do.

Asbestos is an insulant, meaning it can prevent fires and protect nearby items or parts from damage. Asbestos also is strong, which is why it’s used to make automobile brakes.

Asbestos is also the only proven cause of mesothelioma, a rare cancer affecting around 3,000 Americans each year. There are multiple types of the mineral, and all of them are dangerous if inhaled or ingested.

What Is Chrysotile Asbestos?

Chrysotile asbestos is one of two primary types of the mineral, the other being amphibole. The American Cancer Society calls chrysotile asbestos “white asbestos” and is the most common type in industrial applications. This asbestos is often used in drywall mud, roofing materials, textiles, plastics and, yes, automobiles.

Automobile brakes and clutches often include chrysotile asbestos, which means anyone who repairs or installs these parts could be at risk. The Environmental Protection Agency (EPA) says it’s nearly impossible to identify asbestos dust on brakes or clutch components by merely looking at them. The EPA followed up saying that mechanics should assume every car includes asbestos as a safe practice.

According to University of Wisconsin-Madison researchers, this type of the mineral has been prevalent in automobile brakes since the 1940s. In a 2018 article posted on the OMICS International website, authors Marty Kanarek and Henry Anderson explained the relationship between asbestos and automobile work.

Their research shows how the automobile industry relied on asbestos and put workers in harm’s way.

How Asbestos Was Used in Automobiles

According to the University of Wisconsin-Madison experts, an automobile’s braking process causes dust to build up in the wheel well. This dust is comprised of a substance known as forsterite. It’s a non-fibrous magnesium silicate “created by the transformation of chrysotile asbestos during the heat and pressure of braking.”

Asbestos exposure can occur when mechanics install new brakes or replace old ones. Another standard exposure method is from at-home automobile repair.

Asbestos Exposure Due to Brake Removal

When automobile repair workers remove brakes, they will first blow out this dust. However, not all chrysotile asbestos transforms into forsterite. The University of Wisconsin-Madison article cites a report from General Motors Corporation, which found 90,000 unaltered chrysotile asbestos fibers in a single nanogram of brake dust.

So when the blowout process occurs, loose chrysotile asbestos fibers enter the air. This exposure can put many people in danger, not just the person blowing out the dust. The article cites a study that found “measurable concentrations of asbestos” up to 75 feet from the location of the blowout.

Asbestos Exposure Due to Brake Installation

Installing new asbestos-containing brakes is another area of concern. This process often involves sanding or grinding the brakes to ensure a good fit.

The International Center for Disability Resources on the Internet (ICDRI) cited a 2000 study funded by the Seattle Post-Intelligencer newspaper. The researchers “discovered high levels of asbestos in 21 of 31 brake-repair shops” spanning six states throughout the country.

“The same study also found that most of the workers were under the impression that asbestos was banned by the EPA a long time ago,” the ICDRI article states.

The EPA has not banned asbestos. In fact, many environmental groups argue that the EPA isn’t doing enough to restrict commercial use of the mineral.

Some people enjoy working on their automobiles at home — and view it as a way to save money. However, many members of the general public didn’t know asbestos was dangerous until the end of the 20th century.

Many Americans also didn’t know how prevalent asbestos was in automobiles.

The ICDRI states that “non-professional home auto mechanics that repair or replace their own brakes or clutches” were at risk of exposure. Their families were also in danger “since no protective measures are likely taken to prevent fibers from entering the home.”

Since at-home mechanics aren’t professionals, they likely do not have practical tools for repairing their automobiles. They may use tools not well-suited for the job, which can further disturb asbestos and expose themselves and others to loose fibers.

The researchers at the University of Wisconsin-Madison backed up their science by listing numerous mesothelioma cases involving brake installation and repair.

The cases mentioned include:

The article also cites a report involving 1,445 mesothelioma cases. Of them, 51 “were listed” in the automotive category, which includes auto mechanics, brake repair workers and brake lining workers. The Australian National Mesothelioma Registry consists of 6,329 cases from 1945-2000. Of the cases, 58 involved brake work as the only source of occupational asbestos exposure.

What to Do If You Did Automobile Work and Have Mesothelioma

Another harrowing statistic cited in the article involves the work of Dr. Douglas Henderson, an expert for the World Trade Organization. He “calculated” that brake mechanics have 10 times the risk of contracting mesothelioma compared to the general population.

Ten times the normal risk is quite a lot, and it’s more evidence that automobile work can lead to mesothelioma. If you repaired or installed brakes on automobiles, either professionally or at home, you could’ve been exposed to asbestos. The mineral was used for a majority of the 20th century without the general public knowing of its dangers.

If you’ve been diagnosed with mesothelioma, then we are here to support you. Our patient advocate team can explain your options, both medically and legally, and will do everything possible to help. Our registered nurse, Jenna Campagna, is available via email at jenna@mesotheliomaguide.com to answer any questions.