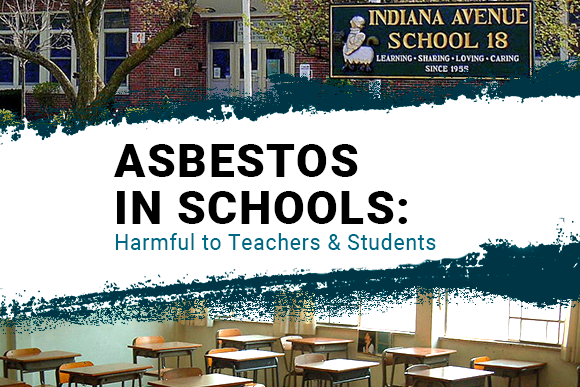 Asbestos in Schools: Harmful to Teachers and Students

No parent wants to hear that their child’s school is shut down due to asbestos being found. No teacher wants to learn about this either.

Unfortunately, this was the case for Indiana Avenue School #18 in Iselin, New Jersey. For the second time this year, the school has closed its doors to both its students and faculty.

“Recent test results have caused us to temporarily close the school, out of an abundance of caution. The health of our students and staff is, and always will be, our top priority. … We appreciate the patience of our entire school community throughout this difficult process,” stated the school’s superintendent Robert Zaga.

The temporary closing of School #18 has raised many eyebrows. It has also increased health and educational concerns among the parents of students. The school has been closed twice now due to air quality issues involving mold and asbestos.

Latest released inspection reports revealed that asbestos was found in the school’s media center. Traces of the carcinogen had also been discovered in three different classrooms.

“I don’t think we should expose our children to a material that can potentially kill them in the long run,” commented one parent.

It is important to remember that there is no safe level of asbestos exposure. Exposing children teachers, and other faculty members at School #18 could lead to serious health complications in their future.

“Up to 1000 premature deaths from lung cancer or mesothelioma will occur in the future among school children from schools where asbestos was used in the walls,” said a review published in Occupational and Environmental Medicine (OEM).

Asbestos is the only known cause of mesothelioma. Every year in the United States, around 3,000 cases of this incurable cancer are diagnosed.

Editor’s Note: This section was written by Devin Golden and added to the article on Nov. 25, 2019.

A teacher and employee of the Philadelphia School District for nearly 30 years was diagnosed with peritoneal mesothelioma. She claims, according to numerous reports, that the disease is due to asbestos contamination in the school buildings.

The 51-year-old woman worked at “two buildings with documented asbestos problems,” according to a report by the Philadelphia ABC television affiliate. She most recently taught at Meredith Elementary School in the city. The TV report includes pictures of exposed asbestos and other debris.

The patient told her story on Good Morning America, a national ABC television show with an audience of around five million viewers.

“I don’t know if I would feel comfortable,” she said on the show, “knowing that I’m going to a place where someone didn’t tell me that there was a toxic substance and that it was in my midst, 2 feet from my head all day, every day.”

The teacher learned of her diagnosis in August 2019.

It might not cross your mind, but asbestos can still be found in many school buildings today. If your child attends or you work in a school that was built prior to 1980, it is possible that the facility still contains asbestos.

In 2013, Asbestos Nation did a study that analyzed school inspection records in Chicago, Illinois. What this organization discovered is quite shocking.

Based on the reports, more than 600 different locations in over 180 schools needed asbestos either removed or repaired. The study was updated in 2015. Regrettably, only 11 schools took the recommendations of their inspection reports to protect their student body and staff.

Asbestos-containing materials in buildings can be a threat if they are disturbed. Normal wearing and aging of a building can cause this. Even pushing thumb tacks into a wall insulated with asbestos can release many unseen fibers into the air.

In older schools, asbestos may still be found in:

As reported by the Environmental Working Group (EWG), “the (Environmental Protection Agency) holds schools responsible for inspecting their buildings every three years and taking steps to ensure that any asbestos fibers present cannot be released into the air. Affected schools must maintain an asbestos management plan and share it with anyone who wishes to see it within five days of the request.”

Parents, teachers, and all other staff members should know if their school is following these guidelines.

Teachers and Students at Risk for Asbestos-Illnesses

In the United States, approximately 15,000 victims succumb to an asbestos-related disease each year. Many individuals are diagnosed due to having exposure in their workplace.

Shipbuilders, factory and construction workers, are but only a few occupations that are at high-risk for exposure. You may not think about it, but even non blue-collar workers, like teachers can be victims too.

According to EWG, “elementary school teachers were more than twice as likely as the average American to die of mesothelioma.”

Not only does asbestos exposure put teachers a risk, but it also puts students at a high risk of developing a preventable disease as well.

“Early childhood exposure, even at very low levels, thus becomes a significant factor when estimating risk, because it allows for such long latent periods,” states a report from American Academy of Pediatrics.

It takes anywhere from 20 to 50 years for mesothelioma to develop. Though it is common for a diagnosis to occur in the elderly, there have been cases of young adults being diagnosed.