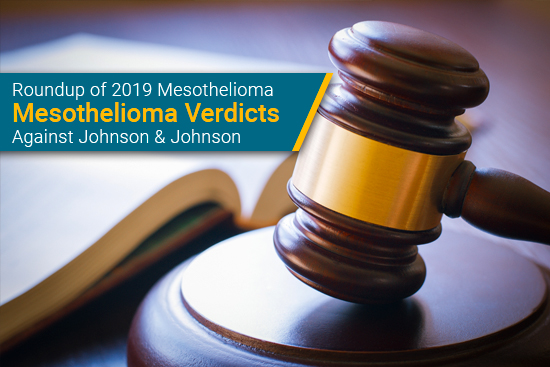 In 2019, the consumer giant Johnson & Johnson took some major legal hits. The company faced thousands of lawsuits centered around some of its talc-based products, including its popular Baby Powder.

The allegations stem from scientific discovery that talcum powder can include asbestos, a dangerous mineral that causes mesothelioma.

Many mesothelioma and asbestos-caused lung cancer patients claim that their past use of or exposure to Johnson & Johnson’s products caused their disease. They put the responsibility squarely on the company’s shoulders — as they should.

Lawsuits will continue to emerge in the coming years, but 2019 might be a turning point in litigation efforts surrounding talc-based commercial items. Here are the mesothelioma verdicts against Johnson & Johnson last year, in chronological order.

A California jury ruled in March that Johnson & Johnson was responsible for a woman’s mesothelioma. The jury ordered the company to pay $29.4 million to the victim, who used both the Baby Powder and Shower-to-Shower Powder products. Both are talc-based items and can include asbestos.

Asbestos can easily pollute talc because they’re both naturally forming minerals that neighbor one another in the earth. When talc is mined and turned into talcum powder — an ingredient used for skincare and cleanliness — loose asbestos fibers can infect the powder.

People who use talcum powder items may inhale or ingest these fragmented asbestos fibers, which can irritate cells and cause cancer. These fibers can advance through the body and enter the protective linings near either the lungs or abdomen.

A New York state jury in May ruled in favor of a mesothelioma victim, who claimed her cancer formed due to using the Baby Powder and Shower-to-Shower Powder items. The jury ordered Johnson & Johnson to pay $25 million in compensatory damages and $300 million in punitive damages.

Punitive damages are more so punishments against the at-fault entity — in this case, Johnson & Johnson — to dissuade it and other companies against taking similar irresponsible actions in the future.

In June, a California jury ruled against both Johnson & Johnson and Colgate. The latter is also linked to mesothelioma through asbestos-tainted talc products.

The victim received $12 million in the verdict, which backed up her claim that a combination of baby powder, shower-to-shower powder and Colgate’s Cashmere Bouquet caused her mesothelioma.

Another industry facing legal complaints tied to talc and mesothelioma is cosmetics. Already in 2020, a children’s toy makeup manufacturer was hit with allegations of asbestos in its products.

A jury in New Jersey ruled in favor of four victims, who alleged that Johnson & Johnson’s Baby Powder caused their mesothelioma. The verdict came in September, but the blows against Johnson & Johnson didn’t stop there.

Later in September, a California jury ruled against Johnson & Johnson. The verdict of $40 million favored a woman who developed mesothelioma, possibly due to using the company’s talc products.

Asbestos exposure from items like Baby Powder can trace all the way back to a patient’s childhood. Many victims were infants when first exposed — their parents applied the powder — and they continued using the item for skincare or general health and cleanliness into adulthood.

Some mothers even develop mesothelioma after using talc-based products on their children. If you used any of Johnson & Johnson’s powders and later developed mesothelioma, you could make a legal claim. Our patient advocates — Jenna Campagna, RN, and Carl Jewett — can help you contact a lawyer and take action against the negligible talcum powder companies.