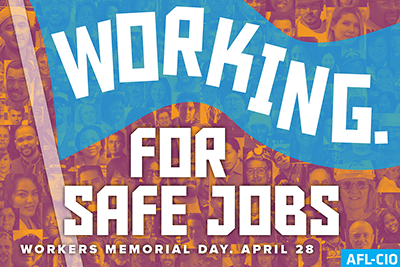 Worker’s Memorial Day honors those who have been harmed by unsafe working conditions, while spreading awareness in the hopes of creating safer jobs. Each year, April 28th is dedicated to remembering workers who have died or become sick from diseases like mesothelioma.

Mesothelioma is caused by exposure to asbestos, which often happens at work. According to the World Health Organization (WHO), more than 107,000 people around the world die from lung cancer, mesothelioma, and asbestosis that they developed from occupational asbestos exposure.

Worker’s Memorial Day falls on the anniversary of the the Occupational Safety and Health Administration (OSHA), which was formed on April 28th, 1971.

“It is a day to honor those workers who have died on the job, to acknowledge the grievous suffering experienced by families and communities, and to recommit ourselves to the fight for safe and healthful workplaces for all workers,” OSHA’s website states.

Worker’s Memorial Day is also promoted by The American Federation of Labor and Congress of Industrial Organizations, known as AFL-CIO. AFL-CIO is an umbrella organization representing worker’s unions from around the United States. Many of these union occupations have been affected by mesothelioma and asbestos exposure.

For many decades, asbestos was widely used in the United States. Asbestos is fire resistant, a great insulator, pliable, and durable. Because of its amazing properties, it was used in many different construction fields.

Here are some construction fields affected:

Many military veterans were also exposed to asbestos while on the job. Veterans make up the largest occupational group affected by mesothelioma. The Navy is the most affected branch because asbestos was widely used in boats, submarines, and ships.

Asbestos was so widely used that any occupational group could be at risk depending on the building they worked in and the products they used.

Here are some other commonly affected occupational groups:

No Safe Levels of Asbestos Exposure

People who have come in contact with small amounts of asbestos or only had brief exposure to it can still develop mesothelioma or other diseases.

All types of asbestos can cause mesothelioma, and there is no safe level of exposure.

Respected organizations like OSHA and WHO warn workers that asbestos is not safe. Unfortunately, asbestos is still used in some imported products and is still found in homes and buildings built before asbestos lost popularity.

Recently, an organization known for writing scientific articles for big corporations updated their limits for how much chrysotile asbestos exposure has “no adverse effects” on people. Data like this is dangerous because it misleads employees and employers into thinking that a small amount of exposure could be completely safe.

Asbestos is a dangerous carcinogen that can cause mesothelioma, and workers are still being exposed to it. Worker’s Memorial Day is an opportunity for the mesothelioma community to honor those they have lost as well as to demand safer work for current and future employees.