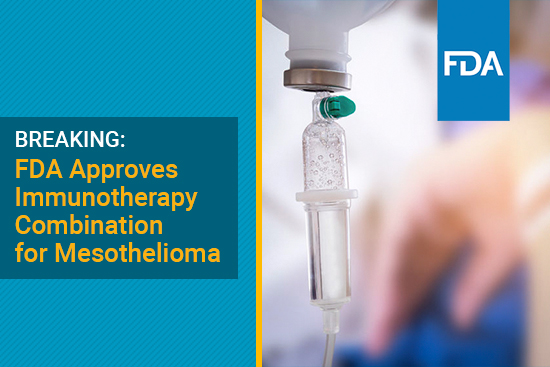 The U.S. Food and Drug Administration (FDA) approved a combination of immunotherapy drugs, nivolumab and ipilimumab, for mesothelioma. The FDA announced the decision last week, another major step forward in providing patients with multiple options for treating their rare cancer.

FDA’s acceptance is specifically for cases that cannot be treated with surgery. While these two drugs are proven to help on their own, a recent phase 3 clinical trial showed their effectiveness when used in tandem.

While this is not the first recent approval for mesothelioma — in 2019, the FDA approved a tumor treating fields device called NovoTTF-100L — it is the most significant involving a drug in 16 years.

In 2004, the FDA approved chemotherapy drugs cisplatin and pemetrexed for the rare cancer diagnosed in around 3,000 Americans each year. Since then, chemotherapy has been the primary therapeutic option for patients who cannot have surgery.

Earlier this year, the FDA accepted Keytruda (another brand-name immunotherapy drug) for very specific cases of pleural mesothelioma with high PD-L1 expression. The approval for Opdivo and Yervoy does not come with the same stipulation, or a similar one. The number of patients eligible to begin the regiment should be substantial.

Dr. Richard Pazdur is the director of the FDA’s Oncology Center of Excellence and acting director of the Office of Oncologic Diseases. He said the two therapies “demonstrated an improvement in overall survival” for patients, who now have “an important, additional treatment option after more than a decade with only one FDA-approved drug regimen.”

Our team can help you access this immunotherapy treatment. Talk to our patient advocate and registered nurse, Karen Ritter, to find a reputable cancer center near where you live. Email her at karen@mesotheliomaguide.com.

How Opdivo and Yervoy Received Approval for Mesothelioma

The FDA examines two qualities: safety and survival. Safety is often measured in the severity of side effects. If a therapy has, at most, mild and manageable side effects, then it should move forward in the process.

The most common side effects of Opdivo and Yervoy are:

Those effects were deemed mild and manageable compared to the effects of chemotherapy, many of which are similar to the list above but more severe.

The survival aspect is based on a comparison to what’s currently available. For people who cannot undergo mesothelioma surgery, the baseline for measuring survival benefit is chemotherapy.

Surgery is the preferred treatment for pleural mesothelioma. Bulk removal of the tumors leads to the best survival rates, but most patients aren’t eligible for surgery due to this cancer’s proximity to the lungs and even the heart.

Plan B is usually chemotherapy, used to slow down the cancer and extend life as much as possible. The median survival, depending on the study and stage of the disease, is between a few months to a little more than one year.

The survival advantage of the Opdivo-Yervoy pairing was analyzed in the Europe-based Checkmate-743 study, which included 605 patients with an unresectable pleural mesothelioma. For up to two years:

The immunotherapy combination led to a median survival of 18.1 months. The patients who received just chemotherapy survived for a median of 14.1 months. So the treatment in question passed the test. These results, which were released just a couple of months ago, led to the FDA approval.

Other noteworthy results from the study were:

What Are Opdivo and Yervoy? How Do They Work for Mesothelioma?

Opdivo and Yervoy improve the immune system’s response to cancerous cells, albeit in different ways.

Opdivo is a PD-L1 checkpoint inhibitor, meaning it subdues a cancerous protein. Opdivo thwarts the connection between PD-L1 and PD-1:

The two proteins link through receptors, and the relationship causes T-cells to ignore mesothelioma cells. T-cells are the body’s primary defense mechanism, tasked with finding and killing intruders and mutant cancerous cells. If the two proteins interact, then the T-cells are blinded to the danger of mesothelioma.

Opdivo acts as a barrier between the two proteins, allowing T-cells to carry out their duty effectively.

Yervoy blocks a different protein connection: B7 and CTLA-4. The former is on mesothelioma cells, and the latter is on T-cells. The connection’s effect is similar to PD-1 and PD-L1, and Yervoy is the blockade that helps T-cells fight back against this cancer.

The immunotherapy drugs are even being tested with mesothelioma surgery. One clinical trial is administering the therapies before and after an operation for pleural mesothelioma. The study is enrolling patients at three U.S. hospitals.