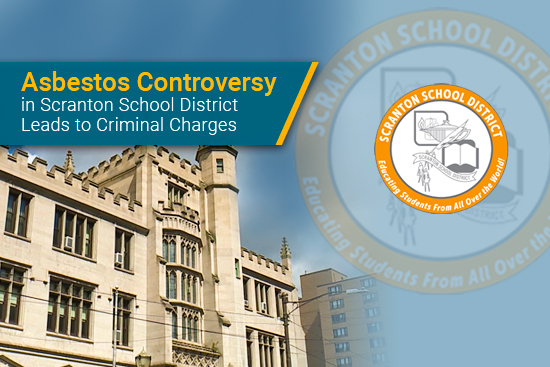 Three former or current school officials in Pennsylvania face criminal charges due to allegations of hiding asbestos issues in schools.

The news, reported by numerous media outlets, is the latest chapter in the state’s struggle to keep its students safe.

Philadelphia’s NBC affiliate TV station reported at the beginning of October that a former superintendent of the Scranton School District was charged with felony child endangerment. Two other officials also face charges. The three at the center of the story are:

The evidence allegedly points to Kirijan, Brazil and Slack hiding the presence of dangerous asbestos — hiding it from teachers, staff, parents and students — for years. The Scranton School District serves approximately 10,000 students and includes around 700 teachers.

Investigators uncovered asbestos in classrooms, restrooms and a cafeteria. According to the NBC report, the officials may have known of the asbestos and lead issues since 2016.

One school principal even told Kirijan and Brazil that some classrooms’ ceilings “had collapsed, sending plaster and dust onto students and their desks and books.” If those ceilings were made with asbestos, which seems highly likely, then students were exposed to a toxic substance that can cause mesothelioma and other deadly diseases.

The report states Kirijan told the principal to only communicate by phone. The principal pressed to continue communicating via email to ensure documentation.

A report from PBS states the charges could lead to decades-long prison sentences.

Scranton is not the only Pennsylvania city struggling with asbestos in old buildings. Numerous schools in Philadelphia closed down at the beginning of 2020 due to rampant asbestos dust. One teacher even developed mesothelioma after working for multiple decades in the Philadelphia School District.

The news of asbestos in schools is not surprising. Many school buildings were constructed during the 1960s, 1970s and 1980s, when use of asbestos was still generally acceptable.

While the public is more aware of asbestos’ dangers now, many older school buildings still contain this deadly mineral. Renovation projects often ignore the presence of asbestos, leaving it in the ceilings, walls and elsewhere.

In short, asbestos in schools is a major health concern in America. Teachers, students, school officials, cafeteria workers, janitors and anyone else who works within the building are likely exposed to loose fibers.