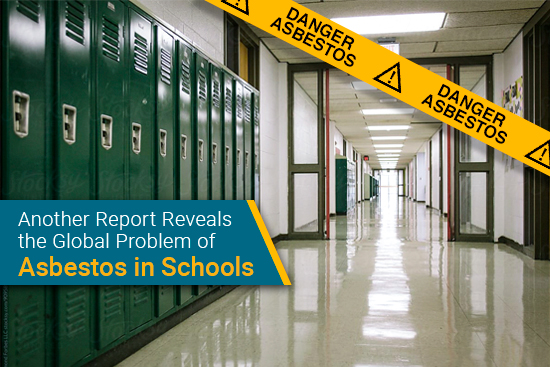 Another Report Reveals the Global Problem of Asbestos in Schools

Twice in the past year, reports surfaced about the widespread presence of asbestos in United States schools.

Philadelphia public schools shut down at the beginning of 2020 due to concerns, and school officials in another Pennsylvania city now face child endangerment charges for ignoring and hiding asbestos issues.

A report from the United Kingdom marks another piece of evidence proving what we’re all starting to realize: Teachers are in one of the most at-risk professions for asbestos exposure and mesothelioma.

Numerous UK online news outlet report that 292 British teachers have died of mesothelioma. The Office of National Statistics provided the data, which goes back to 2005. The rate is approximately one teacher death every two weeks.

The statistics confirm that the United Kingdom has a life-threatening issue within its schools. It’s a problem for American school officials as well. Of course, the people who actually face the problem are those who spend time in the schools themselves — teachers, staff and young children — and they are helpless to the hazard.

How Asbestos Got Into Schools and Why It’s Still There

Old school buildings likely still include asbestos in ceilings, walls, floors and more. Asbestos was applied on or around electrical wiring, plumbing, pipes, insulation, siding, floor and roof tiles, and other building parts. The reason? Asbestos is a heat-resistant mineral, which preserved the buildings’ durability and safety for decades.

Schools built during the 1970s and earlier — like office buildings, homes and entertainment venues constructed at that time — were packed with the substance. While most buildings have either been replaced with newer versions or had asbestos removed during maintenance projects, school buildings might be behind the times.

Public schools in particular already have limited budgets from government funding. Asbestos removal projects are costly for school districts, leading to kicking a deadly can down the road — and toward teachers and students.

While the cost may be cheaper now, it likely is still a multi-million-dollar investment for the United Kingdom, Philadelphia, Scranton, or any other school system in the United States or elsewhere.

The investment is necessary, as asbestos has garnered the appropriate label of “silent killer.”

Why Asbestos Removal Is Necessary for Schools

Asbestos is a delicate, flaky substance that is fragile to the slightest disturbance. Even human touch could cause sharp, microscopic threads to break away, floating in the air undetected.

If inhaled or swallowed, these fibers can reach the sensitive cell linings near the lungs and abdomen. These linings are where mesothelioma forms, usually after decades of asbestos slowly piercing into the tissue and irritating cells.

Any amount of asbestos can cause mesothelioma. The cancer doesn’t need regular exposure to materialize, but rather one sharp fiber that finds its way into the mesothelial cell linings.

Constant exposure does increase the risk, which is relevant for the millions or billions of teachers and students worldwide who spend up to 10 hours a day in dangerous buildings.

Hundreds of teachers in the United Kingdom have already suffered the consequences of their school officials’ inaction or ignorance regarding asbestos. One teacher in Philadelphia received a mesothelioma diagnosis connected to her 30-plus years of teaching in the school district.

Many more victims will emerge in the coming years. Until school districts and leaders take their asbestos problem seriously — that is, the old and decaying asbestos hidden from sight but well within striking distance of causing cancer — the problem will continue for decades.