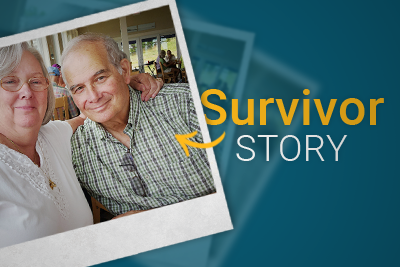 Jerry Griffith is a soon to be 15 year survivor of pleural mesothelioma. When he was diagnosed in 2001, he was told he only had months to live, and he believed it. So much so that he almost refused treatment. Now Jerry is about to turn 71 and celebrate his 50th wedding anniversary with his wife, Lynne.

Jerry worked as a middle school teacher for 35 years but by September 2001 he had developed a painful cough. He decided to go see his family doctor to get it checked out. His doctor sent him to get a chest scan and from there he was sent to a lung specialist. By the time Jerry arrived at the lung specialist’s office, he was feeling terrible.

“When I got there, I was in much pain and very weak, and I collapsed. The doctor called for an ambulance and I went to the hospital. After a lot of tests, and an attempt to drain something in my lung, I was admitted to the hospital,” Jerry told Mesothelioma Guide.

After surgery, recovery, and a trip to the oncologist, Jerry was finally diagnosed with pleural mesothelioma. His doctor estimated that he only had 6 to 9 months to live but recommended treatment with chemotherapy.

Jerry told his doctor no. “No, there will be no chemotherapy! If I have six months to live, I am not going to be sick all the time and then die!”

Fortunately, his wife and his friends convinced him to start chemotherapy. They explained that if he tries the treatment it could extend his life or improve his condition. Jerry took their wise advice and has lived over 20 times as long as he expected. Jerry has been on and off chemotherapy since he was diagnosed but is happy to say that he is currently doing well without it.

Jerry’s Advice for Other Patients

Growing up in the Asbestos City

Jerry and his only brother grew up in New Jersey. When he was 10 years old his family moved to a city called Hillsborough, just outside of Manville. The town of Manville was named after the the Johns-Manville Corporation.

He lived there until he got married and moved away at age 21. The factory in Manville was once the largest of the Johns Manville factories. Not only was the town named after the company, it was also nicknamed “The Asbestos City.” Pieces of asbestos would float through the sky like snow throughout the year.