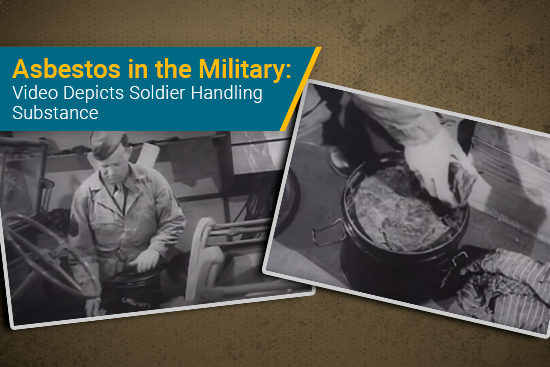 For most of the 20th century, the United States military relied on asbestos for constructing equipment and buildings. The result was thousands of veterans developing mesothelioma once their service time ended.

A well-circulated YouTube video shows one example of how military members interacted with the cancer-causing mineral — with no safeguarding whatsoever.

A video surfaced five years ago showing a U.S. soldier handling an asbestos compound with his bare hands. The soldier is doing so to waterproof Jeeps during World War II, a common occurrence since vehicles needed to drive through water for the Normandy D-Day invasion.

How Asbestos Was Used in the Military

Asbestos was a useful substance for many decades in construction and insulation trades. Why? Because the mineral is fire-resistant and cheap to produce. Since the U.S. military valued any material that prevented fires, it prioritized asbestos when building:

For vehicles, particularly, asbestos was used in brakes, gaskets and air-cooling systems. Anyone who helped build these vessels or vehicles likely was exposed to asbestos. Neither the military members nor the government knew of asbestos’ cancerous characteristics. Only the manufacturers who sold asbestos-inclusive products to the military knew of the health risks.

However, they didn’t disclose this information and put many military personnel at risk — including veterans who waterproofed Jeeps.

How the Military Waterproofed Jeeps

According to the video, the military learned it could waterproof Jeeps and other vehicles in specific circumstances. The vehicles could last in 3.5 feet of water for at most six consecutive minutes. The film shows Jeeps nearly submerged yet operating as normal.

To accomplish this, military members used a flexible tube to evict water from areas that could damage the vehicle. This tube attaches to the vehicle’s intake on one end and the windshield frame on the other.

However, this tube on its own cannot protect the vehicle from water damage. That’s where asbestos comes into the picture.

Military personnel used asbestos to form a clay-like compound called Asbestos Waterproofing Compound (AWC). This compound would seal off electrical systems, battery vents, the in-vehicle fire extinguisher and other vulnerable, sensitive vehicle parts or items. Sealing off these parts also funnels the water toward the tube, where it’ll drain from the vehicle.

Asbestos is the only confirmed cause of mesothelioma, and veterans unfortunately comprise 33% of all mesothelioma cases. One reason why could be due to decades of handling asbestos compounds and products without any gloves, masks or protective gear.

The video shows that the asbestos compound used for waterproofing the vehicles is a thick, compact substance. However, if any asbestos fibers were to loosen, then anyone handling the mixture or in the vicinity would be at risk.

If your loved one was a World War II veteran and waterproofed Jeeps or other vehicles, they likely interacted with asbestos. If they have died of mesothelioma, then their military service could be why.

This waterproofing process likely was used in other wars since World War II. If you or your loved one was a military veteran and later developed mesothelioma, then we can explain your medical and financial options. Contact our veterans advocate and VA-accredited claims agent, Carl Jewett, at cjewett@mesotheliomaguide.com.