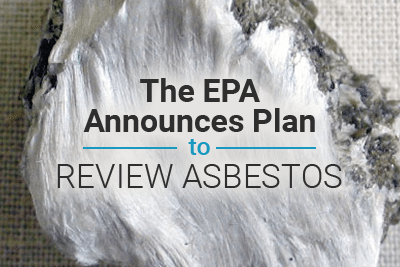 The EPA Announces Plan to Review Asbestos as a Toxic Substance

The Environmental Protection Agency (EPA) has decided to include asbestos among the first ten chemicals to be evaluated under the new Toxic Substance Control Act. To anti-asbestos ralliers and mesothelioma warriors, this means that we are one step closer to officially banning asbestos.

Within six months of evaluating the first ten chemicals, the EPA will release a document for each chemical that includes:

The EPA has tried to ban asbestos in the past, but they haven’t been successful. Under the new Toxic Substance Control Act, the EPA will finally have the support that they lacked in previous attempts to ban asbestos.

“Under the new law, we now have the power to require safety reviews of all chemicals in the marketplace.” said Jim Jones, the assistant administrator of the EPA’s Office of Chemical Safety and Pollution Prevention. “We can ensure the public that we will deliver on the promise to better protect public health and the environment.”

Regardless of the EPA’s promises, many manufacturers and industries continue to combat the banning of asbestos because of its desirable properties:

“It is important to note that a chemical’s inclusion in this first group of ten chemicals does not in and of itself indicate anything about the safety of the chemical. Its listing is simply an acknowledgment by the Agency that it plans to conduct risk evaluations on these ten chemicals before others,” said the American Chemistry Council.

Asbestos is considered to be a human carcinogen and there is no known level of safe exposure. Knowing this could be a huge victory for the EPA and a massive wake-up call to manufacturers that currently reap the benefits financially for using asbestos.

With the recent election of president Trump, there had been great fear that asbestos wasn’t going to be addressed by the EPA. Trump has made statements about cutting funds and dismantling the EPA. He has also stated the he doesn’t believe that asbestos is harmful and that the movement to ban asbestos is a mafia conspiracy.

In the past, Trump settled a class-action lawsuit that involved demolition workers who were hired to clear the site for the Trump Tower in New York. While clearing the site, many of the workers were exposed to asbestos due to lack of proper protective equipment.

Thankfully, the EPA will not have to worry about any interference from the new president. The EPA will now be protected legally by the requirements of the new Toxic Substance Control Act. They will be able to take all actions that are necessary to meet deadlines and to fully evaluate the chosen chemicals.

Recently, Trump appointed Scott Pruitt to run the EPA. Scott is known for his involvement in the fossil fuel industry. He is also known for opposing environmental regulations from the federal government. Despite Scott being in charge of the EPA, the organization should still have no issues with banning asbestos.

Under the new Toxic Substance Control Act, the EPA will have up to three years to determine the risks of the first ten chemicals on their list. If the EPA finds a chemical to be hazardous, they must mitigate its risks within two years. This means that the EPA may finally be successful in banning all forms of asbestos by 2021.