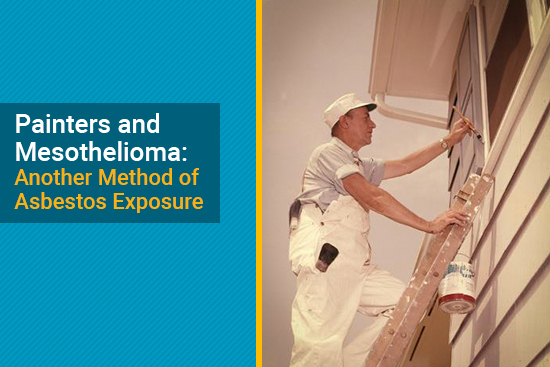 Painters and Mesothelioma: Another Method of Asbestos Exposure

The International Agency for Research on Cancer (IARC) released a series of books that listed and explained all substances that were carcinogenic to humans. Of course, asbestos was a no-brainer for inclusion.

The IARC’s 100th volume in this series tied these cancer-causing agents to occupations at risk of exposure. Among the many linked to asbestos? Painters, both commercial/professional and do-it-yourself homeowners or office workers.

Occupational asbestos exposure is the No. 1 method for developing mesothelioma, a rare cancer caused solely by inhaling or swallowing loose asbestos fibers. This fact is well-known today, but it wasn’t in the 1950s, 1960s, and 1970s. Electricians, construction workers, insulation workers and other tradespeople were kept oblivious about the threat of asbestos.

For nearly all of the 20th century, this mineral was an ingredient in mixtures and compounds used in trades. It was also applied around electrical wiring, construction components and more. Asbestos is durable and resistant to fire, which made it an attractive commercial ingredient.

Asbestos was also a primary ingredient in many types of paint. This inclusion put a lot of unsuspecting Americans at risk — which they didn’t know until decades later.

Why Was Asbestos Used in Paint?

The Centers for Disease Control and Prevention mentions painters on a lengthy list of occupations exposed to asbestos. Why? Because this toxin was often included in the most relevant part of their job: paint.

The IARC’s “Chemical Agents and Related Occupations” book said it was “used as a filler to improve the technical properties of paints, particularly those used in shipyards and on bridges.” You could also find asbestos-filled paint for homes and offices. According to the United States Environmental Protection Agency, asbestos was also found in:

Asbestos isn’t dangerous if it remains stable and part of a paint mixture. The issue is this mineral doesn’t always stay intact.

Risk of Asbestos Exposure for Painters

Asbestos is composed of fragile fibers, which can flake off with the touch of a fingernail or soft gust of air. These fibers are weightless and microscopic, which is why they float in the air undetected.

If asbestos fibers are loose in the paint mixture, they can put anyone nearby in danger of swallowing or inhaling the sharp particles. Painters are obviously vulnerable.

In the British Journal of Cancer, painting was listed alongside plumbers and electricians for jobs most at risk of occupational asbestos exposure. Only carpentry surpassed these three trades.

Buying or using paint with asbestos is no longer a concern in the 21st century. The practice of inserting asbestos to commercial components was put in the past in the 1980s and 1990s. Still, asbestos in paint was a health risk for decades — and people may just now be dealing with the consequences.

The connection between professional painting and mesothelioma is well-documented. Four European studies showed an “increase in mortality from mesothelioma” among painters compared to the general population.

Two case-control studies — one from Canada and one from the United States — revealed 37 malignant mesothelioma cases among people employed as painters. Most of these cases were from 1988-1997. There likely have been many more former painters diagnosed in the 21st century.

Even in the 1990s, 2000s and today, people were and are in jeopardy of decaying paint mixed with asbestos. Professional painters — whether working on bridges, shipyards, offices or homes — may be tasked with removing old paint and updating the structure or building’s appearance. DIY projects may involve work with old asbestos-contaminated paint.

If you live in an older home or manage an older office building, we encourage you to hire a professional for all paint projects. Your home or office may have asbestos in the paint, and you shouldn’t risk your health.

If you have mesothelioma — or your loved one has recently passed away from this cancer — after working as a painter, reach out to our staff.  We can explain further why asbestos was used in paint for decades, along with why this use was tied to unethical business practices.