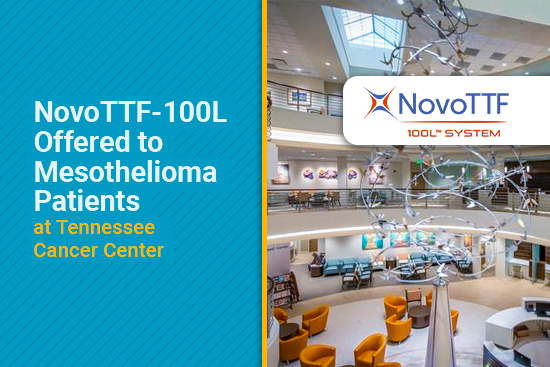 On May 23, 2019, a press release from the company Novocure made history. It announced that the United States Food and Drug Administration (FDA) had approved the NovoTTF-100L System for treating pleural mesothelioma.

And one patient already has.

West Cancer Center, located in the suburbs of Memphis, Tennessee, announced earlier this week that the institution is the first center in the country approved to prescribe NovoTTF-100L. The news is a significant step forward in mesothelioma patients gaining access to the new treatment.

Dr. Matthew Ballo, the director of radiation oncology at West Cancer Center, actually announced that a patient has started receiving this treatment through the institution.

“We are really proud that West Cancer Center is the first to offer this therapy as part of a combination treatment, giving another, much-needed option to (pleural mesothelioma) patients and their families,” Dr. Ballo said in a press release.

“We actually have just prescribed NovoTTF-100L for one of our patients, and he will be the first in the country to receive this treatment.”

You could be the second.

If you’d like to get access to this treatment through the West Cancer Clinic, we at Mesothelioma Guide can help. The NovoTTF-100L can be an option for newly diagnosed patients or people who have known of their disease for quite some time.

Our patient advocate and registered nurse, Karen Ritter, has connections with the top cancer centers in the country, including West Cancer Clinic. Email her at karen@mesotheliomaguide.com to start a conversation.

Mesothelioma treatment is mostly limited to surgery, chemotherapy and radiation. For most of the 21st century, those were the only options for patients with this disease.

The NovoTTF-100L is the first FDA-approved treatment for any type of mesothelioma in more than 15 years. How it earned that distinction is due to its effectiveness at treating the disease and its non-invasive characteristics.

According to Novocure’s research, mesothelioma tumors are sensitive to these electrical currents. The company’s latest clinical trial backs up that claim.

Of the 80 participants (who also received chemotherapy along with the tumor treating fields):

The NovoTTF-100L is also easy for patients to use. It’s a tiny, wearable device and can operate throughout the day and night, even when the patient sleeps. The device’s operation is also mostly unnoticeable.

Dr. Uri Weinberg, the vice president of clinical development for Novocure, spoke with Mesothelioma Guide recently on a podcast about the NovoTTF-100L’s non-invasive appeal.

(Editor’s Note: You can listen to the podcast with the player below.)

“Most patients do not feel anything unusual while receiving the therapy,” Dr. Weinberg said on the podcast. “This is actually one of the major assets, allowing patients to maintain their quality of life.”

More Centers to Offer the NovoTTF-100L?

Those details regarding the FDA’s approval were provided on May 23, 2019. However, many other questions were left unanswered. One of the biggest: Where would people get this treatment?

That question is now answered.

The news of the West Cancer Center now offering the treatment means pleural mesothelioma patients can access the device if they wish. This announcement could be the start of an avalanche, with more cancer centers receiving the same approval. If so, then the invention will become even more accessible.

Dr. Weinberg indicated on the podcast that it was only a matter of time before the NovoTTF-100L was offered at numerous cancer centers throughout the country.

“We are working with multiple centers of excellence, “ Dr. Weinberg said. “Any physician who is interested in prescribing the therapy and proposing this treatment for their patients can contact Novocure.”