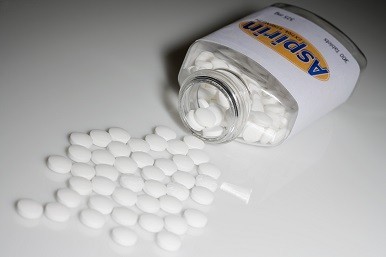 Researchers from the University of Hawaii Cancer Center have discovered that aspirin’s anti-inflammatory properties may prevent the growth of mesothelioma, a cancer caused by asbestos fibers that kills thousands of people each year.

According to Dr. Haining Yang, an associate professor in the Thoracic Oncology Program at the UH Cancer Center and lead researcher for the study, aspirin can help prevent the formation of mesothelioma by inhibiting inflammation that occurs in response to asbestos exposure.

Asbestos is made up of long, spindly fibers that when inhaled or swallowed are difficult for the body to dislodge. As such, asbestos fibers lodge in the membranes that line the lungs, heart and abdominal cavity. The body’s natural inflammatory response kicks in, causing the tissues surrounding the asbestos fibers to become inflamed and swollen. This is how mesothelioma starts and develops.

In the process, the inflammation irreversibly damages the tissues and cells. Natural cell processes cease, and the cells may no longer respond to natural hormonal cues to stop dividing and die. The damaged cells continue to grow and divide, mutating over time and becoming malignant.

Aspirin blocks the inflammatory effects of High-Mobility Group Box 1 (HMGB1), a protein secreted by immune cells during the inflammation process.

Scientists from the University of Hawaii tested the effectiveness of aspirin against this protein in mice. They found that inhibiting HMGB1 significantly reduced the development of malignant mesothelioma in the mice and improved their survival. Scientists say aspirin inhibited HMGB1 when the mice took one tablet per day early on, before the disease had progressed.

The study shows that the average survival rate of mice with mesothelioma that weren’t given aspirin was a little more than 76 days, while for the mice that were given aspirin survival time was about 96 days.

Because of these findings, the study is now in human clinical trials.

Who Could Benefit from Taking Aspirin?

People who work in construction, in industrial trades, or as firefighters have a high risk of asbestos exposure on a daily basis.

Asbestos is a known carcinogen that leads to the development of malignant mesothelioma 20 to 50 years after exposure to asbestos. While the dangers of asbestos are known, it is still widely used in a variety of different products and industries for its affordability, tensile strength, sound absorption qualities and resistance to fire, heat and electrical and chemical damage.

Those who work in fields with a high risk of exposure to asbestos must use safety equipment, such as hazmat suits and masks, to avoid contamination with asbestos. However, it still occurs. For that reason, the researchers theorize that these high-risk individuals could take aspirin regularly as way to prevent or reduce the inflammation that occurs with asbestos exposure.