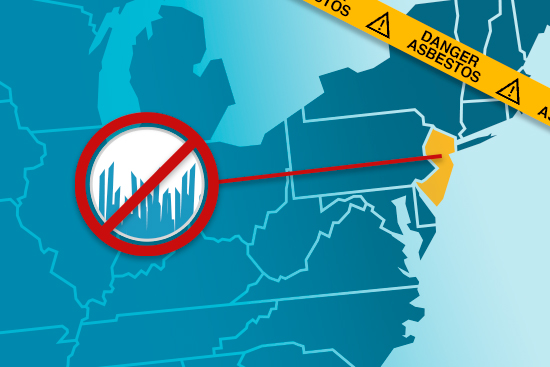 The United States government has balked at the idea of a complete ban on asbestos, a dangerous, mesothelioma-causing mineral used in numerous consumer products.

New Jersey’s government, on the other hand, didn’t shy away from approving potentially life-saving legislation.

New Jersey Governor Phil Murphy signed the bill, titled A4416, into law on May 10, 2019. The New Jersey legislature passed the asbestos-ban proposal unanimously in March of 2019, and the law will take effect Sept. 1, 2019.

The bill specifically outlaws the “sale or distribution of products containing asbestos,” according to the New Jersey state government website. There is a $2,500 fine for each violation.

The agency’s officials also have explicit power to enforce the new rules. The law states, “The (Department of Environmental Protection) shall have the right to enter … any retail establishment in order to determine compliance with the provisions of this act.”

Asbestos is the single cause of mesothelioma, a rare and aggressive cancer impacting thousands of Americans. The carcinogen is a fire-resistant mineral and cheap to manufacture, which is why many industries used asbestos in their products. The most common uses of asbestos were in construction and insulation.

Whether or not to enact a federal ban on asbestos is a meaningful discussion. Currently, more than 60 countries have banned the substance. However, the U.S. only has regulations in place regarding asbestos use in consumer goods. Some applications of the substance are still accepted despite the severe health risks and the growing number of mesothelioma lawsuits against asbestos manufacturing companies.

Not in New Jersey. Not anymore.