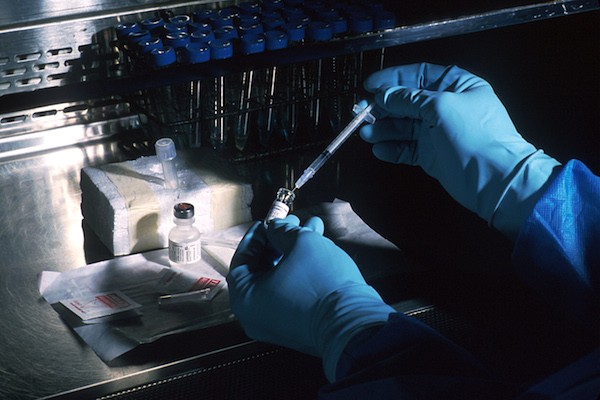 Earlier this month, the results of a Phase I clinical trial of a new mesothelioma drug were published. The trial tested the safety of an immunotoxin designed to weaken mesothelioma cells, making them more vulnerable to chemotherapy. It is being led by mesothelioma specialist Dr. Raffit Hassan of the National Cancer Institute (NCI).

The first phase of the trial tested an immunotoxin known as SS1P in 24 late stage mesothelioma patients who were also undergoing standard chemotherapy with Alimta (pemetrexed) and cisplatin.

“SS1P given with pemetrexed and cisplatin is safe and well tolerated,” said the authors of the study. They also said it “exhibits significant antitumor activity in patients with unresectable, advanced pleural mesothelioma.”

The results of the study found that 10 of the 13 patients who received the maximum tolerable dose of SS1P responded to the treatment. One patient had a stable disease after treatment, which is amazing for late stage mesothelioma. The clinical trial, which began in 2011, is still active but not currently recruiting.

Dr. Hassan is one of the most prolific mesothelioma researchers in the country. He has a clinical interest in immunotherapies, such as SS1P. Dr. Hassan was integral in research that led to recognizing mesothelin, a protein found in higher concentrations among certain cancer patients, as a target for mesothelioma.

The combination of Alimta with a platinum-based chemotherapy, like cisplatin, is the only known route of chemotherapy to have an effect on patient survival times. This standard of care was developed fairly recently, as Alimta wasn’t even approved for use in mesothelioma patients until 2004.

In the eyes of most doctors, the survival times produced by the cocktail of chemotherapy drugs could be much better. Mesothelioma already has a relatively short prognosis of 4-12 months depending on how advanced the disease is. Alimta and cisplatin, in most cases, have only added a few months to overall survival times, and some patients don’t respond to the treatment at all.

Standard chemotherapy laid the foundation for better treatments to be built on, which is exactly what Dr. Hassan and his team at the NCI intend to do in this clinical trial.

What is an Antimesothelin Immunotoxin?

The new drug in question is called SS1P, and it is known as an antimesothelin immunotoxin. It is a genetically engineered antibody designed to home in on and attack mesothelioma cells.

When the immunotoxin attaches to the cancerous cells, this should either kill or weaken them. The hypothesis goes that these weakened cells won’t be able to defend themselves as readily against chemotherapy drugs.

The clinical trial testing the efficacy of SS1P with Alimta and cisplatin could have a tangible benefit for patients who aren’t eligible for more aggressive treatment. However, it isn’t known when, or if, the trial will move toward Phase II.

Regardless of whether the trial moves forward, researchers have discovered that SS1P can improve survival times in advanced stage patients when combined with other treatments. Therefore, the immunotoxin is also being tested in conjunction with treatments other than Alimta and cisplatin.

If you or a family member is interested in learning more about the eligibility and progress of these trials, get connected to a trial now.