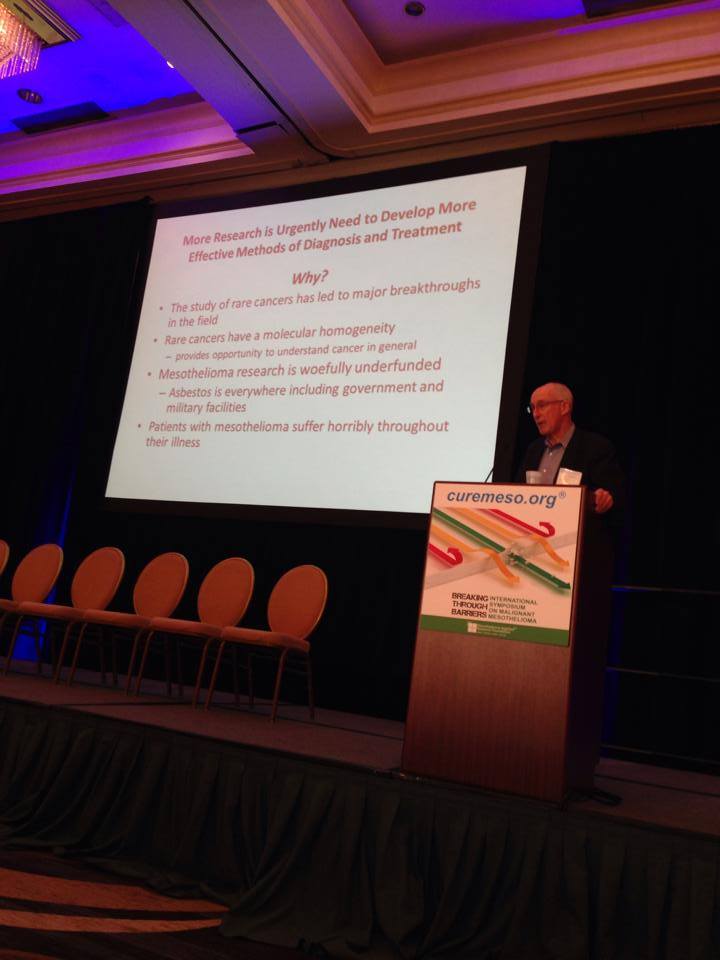 Today concludes the 11th Annual International Symposium on Malignant Mesothelioma, which took place in Virginia over the past three days. The symposium was a congregation of surgeons, oncologists, innovative drug companies, patients, families and advocates.

The event was successful in covering topics for patients, families and medical professionals as well as for spreading awareness. The speakers did an excellent job explaining the topics in plain English and videos will be available soon on the Meso Foundation’s Youtube channel.

The first topic of the symposium was opened by Dr. Faris Farassati of the University of Kansas. This 30-minute discussion summarized the importance of research for mesothelioma cancer stem cells, a subject of discussion for much of the subsequent talks.

The panelists in this discussion gave very conversational answers and opinions not only recovery but also the current state of surgery in mesothelioma. Dr. Marc DePerrot was asked about the revolutionary SMART procedure for pleural mesothelioma patients that administers radiation before surgery instead of after.

“We have seen many patients surviving four years or more doing well,” said DePerrot. This number is amazing, though why the treatment is so effective is still under investigation.

Dr. Joseph Friedberg talked about his method of using photodynamic therapy with surgery, but felt it important to mention there is no standard of care for surgery in mesothelioma patients. This was a consensus on the panel.

“It is really important to understand that all surgery is experimental, there is no standard of care,” said Mary Hesdorffer of the Meso Foundation. She concluded that “we need to get those answers.”

Also discussed was robot-assisted surgery and the potential for quicker recovery. The ultimate consensus among the panel was that although it may be feasible in the future, they don’t see how robotic surgery could have any benefit. Indeed, some surgical procedures would take much longer.

This discussion progressed toward an impromptu debate between Drs. Robert Taub and Paul Sugarbaker.

There was disagreement on how surgeons conduct surgery. Dr. Taub was of the opinion that surgeons have a different procedure for operations, but Sugarbaker rebutted this claim saying that through conferences and studies, surgeons have streamlined a lot of how they attack peritoneal mesothelioma.

Taub believes diversity is more important until the disease is better defined, and he does indeed go about surgery a bit differently than Sugarbaker. On the subject of heated intraperitoneal chemotherapy (HIPEC), Taub said “HIPEC warming is about as settled as global warming.” According to him there could be issues with increasing blood flow and future drug resistance. The issue was the heating aspect, not the intraperitoneal aspect.

Dr. Richard Alexander responded to an audience member’s question about her mother’s inoperable mesothelioma; he said second opinions are the best way to go.

Each doctor was asked where they hope research would take the treatment of peritoneal mesothelioma and Dr. Alexander had the most well-received reply: “In the long-term, what I want is to put myself out of business.”

This topic really spoke for itself. The panel talked about the quality of life for pleural mesothelioma patients and procedures that can make life easier. Living without a lung after an extrapleural pneumonectomy was also mentioned. The panel agreed that if you have healthy lungs, one lung can take on the work of two fairly well.

Interestingly, they even touched on the subject of medical marijuana. It is completely counterintuitive to inhale smoke and maintain pulmonary health. However, Dr. Daniel Sterman said it is “important to remember [medical marijuana] can be taken orally.”

The mesothelioma community is recognizing the need for new treatments, and many are beginning to come to fruition, making this segment particularly interesting.

Dr. Dirk Brockstedt talked a lot about immunotherapy and cancer vaccines, which are making a serious buzz in mesothelioma treatment circles. He explained how these vaccines turn the immune system against mesothelioma cells by targeting mesothelin which is expressed in cancers such as mesothelioma.

He also talked about a clinical trial for a new drug, CRS-207. The drug is in Phase 1b of clinical trials and he seemed optimistic about it. There are 16 people who aren’t eligible for surgery currently enrolled.

Defactinib was also a hot topic. This drug has been covered by Mesothelioma Guide previously because it holds potential to be a standard for maintenance treatment of mesothelioma.

Quality of life is one of the key goals in this trial, according to Dr. Mitchell Keegan. The trial also relies on documentation of how the participants feel to study what the quality of life is like for patients undergoing this treatment. More trials for defactinib are planned to open and enroll more patients.

Doctors on this panel discussed the long-term risks of radiation therapy and trends of radiation in a multimodal setting. The trends seem to support Intensity-Modulated Radiation Therapy (IMRT) following surgery.

Dr. Kenneth Rosenzweig also pointed out that “there is a learning curve on the part of the radiation oncology community.”

Dr. Rosenzweig also discussed the role of photodynamic therapy (PDT) along with radiation, saying that “Finding out ways to integrate PDT with immunotherapy could be good as well.”

Deciding to undergo chemotherapy treatment is a big decision because it can hurt quality of life with no guarantee of efficacy. The panel generally agreed that the overall health of the patient is most important in determining whether to proceed with chemotherapy.

Essentially, he said it is important to get an idea of how physically fit the patient appears.

Doctors usually try to use alimta and cisplatin, but carboplatin is substituted in people with kidney toxicity because it may be easier on the kidneys. “Carboplatin is the kinder, gentler cousin of cisplatin,” said Dr. Evan Alley.

Dr. Raffit Hassan discussed his approach saying he tries to do 6 cycles of therapy if the patient can handle it, though he may allow just 4. He does not do maintenance therapy with Alimta because he believes there is no serious effect, saying “in mesothelioma right now there isn’t good data” supporting maintenance therapy. However, Dr. Alley said maintenance chemotherapy is being studied in a Phase II trial.

Dr. Jahan also mentioned Vinorelbine as a potential new drug and Alley agreed, though he said it can irritate the veins and may require a chemotherapy port.

This panel also tackled the contentious issue of placebo-controlled studies. They said it’s always hard talking to patients about this because there is a chance they won’t receive any treatment. However, they think patients should participate if the science is strong and there aren’t other options.

Second and third-line therapy has no standard of care or reasonable treatment so the doctors emphasized these trials are important to improving mesothelioma treatment.

Dr. Jahan also mentioned that there are evaluations. He says if your disease has progressed after your first evaluation you should move on to other treatment options.

Obviously, one of the biggest issues with mesothelioma is early detection, which is key to getting a good prognosis. Dr. Michele Carbone talked about genetic predispositions for mesothelioma.

Dr. Andrew Todd gave an impressive overview of the Insulators Tissue Bank at Mount Sinai School of Medicine. The tissue bank is a collection of the tissue of asbestos workers, which began from a roster collected over 22 years. Dr. Todd stressed how important these banks are for research because 8-9% of the tissue is from people who died of mesothelioma; this is compared to less than a percent of the general population who die from mesothelioma.

Wrapping Up the Second Day

The first day following the advocacy day was wrapped up by talking about the importance of comprehensive care programs. The message was straightforward: comprehensive care centers have more resources to provide the best care possible to patients.

The last day of the symposium was more laid back and was essentially a conclusion to the overarching mission statement that more funding is needed for mesothelioma research.

In “Translating the Science Seminar” Dr. Alexander explained really well what exactly advocates and patients should know about the science side of mesothelioma in terms of survival rates, research and outlook. The science seminar was a separate seminar for medical professionals spanning Wednesday and Thursday.

He continued to talk about the decrease in other cancers over the past decades as a result of the research funding common cancers have received, ultimately leading to an impassioned conclusion highlighting the need for more funding.

“Unmet Needs of the Mesothelioma Patient”

Mary Hesdorffer, executive director of the Meso Foundation, led this talk. Unmet needs included things such as: better health coverage, issues with medicaid, diagnosing mesothelioma and, of course, the need for further research.

“We are probably the rarest of the rare diseases,” said Mary Hesdorffer.

This speech was predominantly given for people over live-stream as those in attendance were meeting with members of the American Legion, which is offering their support. She expressed the importance of this relationship by explaining how the rarity of mesothelioma gives it such a small voting mass, which absolutely requires support from outside the community.

One of the best things she brought up is that if someone has a dire prognosis, they shouldn’t give up hope. It is important to remember that statistics in mesothelioma studies are based on only 20 to 30 people because the disease is so rare.

Below is a list of specialists in attendance as well as a recap of some of the topics covered.