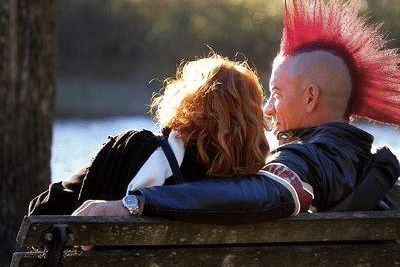 Continued from PART 1 of Alexis’ Story…

I was pretty depressed.  Here I stood at a crossroads in my life, & I felt like I was being punished… not only for having a cancer that I did nothing to earn, but for surviving the hell that was my first round of treatment.

Before my surgery, I actually had been working two jobs… the weekday job which had afforded me the opportunity to pay into a group insurance plan, & the weekend job which afforded me creativity & fun.  Soon after I was laid off from & lost my insurance from the weekday job, I helped to fill in for a couple of staff members while they were on vacation at the weekend job.  It was really great, because it allowed me to ease back into being more physical as well as helped to keep me going while I was looking for a more permanent position.  As fate would have it, I ended up getting a full time post at what once was the weekend job, which could not have come at a more opportune time..  However, it does not afford me insurance.  Of the other employees at the small boutique, I am the only one who requires it.  Everyone else is either on their husband’s insurance through their jobs, or on their parent’s insurance because they are living at home & going to college.  But at least I get to do something that I love for a living… so few can say that.

Next month, I will have been married to an amazing man for two years… though we have been together for eight.  He was there with me on the day I was diagnosed, & he is the biggest reason why I want so much to live.  He has health insurance as part of his retirement package… he worked for the City of Houston for more than twenty years.  However, they are required to utilize doctors that are a part of the Kelsey Seybold managed healthcare system. They serve him well, but after all I have been through with my oncologist & surgical team at Methodist Hospital, I cannot imagine trusting my cancer to anyone else.  Not to mention the ordeal it would take for me to get permission from the insurance company to approve me seeing my oncologist… & it would likely be considered out of network.  That would mean very little coverage.  And the real kicker… to add me to my husband’s plan, it would cost more than we could possibly afford.  Even if they did not reject me outright because of… you guessed it, my preexisting condition.  We asked for the quote without mentioning that little tidbit of information.

As of this summer, it has been four years since I have seen my oncologist.  Mostly because I make too much money for any sort of financial assistance, & I cannot seem to get insurance on my own.  Four years is far too long to wonder what is going on inside of my body with a cancer that has no cure.  And while I do not dwell on the ‘c’ word every moment of every day -(i have a life to live, you know)-, the more time that passes, the more concerned I get.

I do have a light at the end of the tunnel, though.

The Affordable Care Act is going to allow me to pay for insurance again.  Without getting into the politics of it, because I know what a hot button issue this is, but just looking at my specific situation… I am going to be able to buy into a group plan that will include several million other people who cannot get insurance now due to their own preexisting conditions.  Or because they are self-employed & cannot get an affordable premium. Or whatever other reason.  I will no longer be penalized because I have mesothelioma.  I will be able to choose a plan that my husband & I can afford, & because of this I can work with my doctors to retake charge of my health.  I can be more proactive, because I will be more informed. I can better prepare my body for what is to come.  And ultimately, I might end up with more time to spend with my husband, my chosen family, my dog, & my cat.

And very soon, instead of health insurance being an impossible dream, it will be the gift I can give myself.