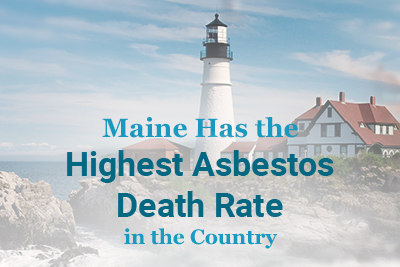 Maine Has the Highest Asbestos Death Rate in the Country

A recent Centers for Disease Control (CDC) study unveiled that the state of Maine has the highest rate of asbestos-related deaths. Every year in the United States approximately 2,000 to 3,000 people are diagnosed with mesothelioma. The only known cause of mesothelioma is asbestos exposure.

Some of the major occupations that the CDC reviewed were:

Researchers discovered that between the years of 1999 and 2015 the annual death rate from malignant mesothelioma in Maine was 22.06 per million people, higher than any other state in the U.S. Many of the residents of Maine that were diagnosed with mesothelioma were between the ages of 55 and 84.

Maine’s housing stock is considered to be one of the oldest in the United States. 31 percent of the state’s building structures were built before the year 1950. Many homes built between the 1930s and 1950s may contain asbestos building materials in them.

Asbestos was used in many homes and buildings in the form of:

If materials that contain asbestos are not disturbed, they pose no harm. If a demolition or renovation crew disturbs asbestos while working, it puts them at risk of being exposed to the dangerous asbestos fibers that they release into the air.

Will the EPA Ever Ban Asbestos?

Asbestos is still not officially banned in the United States. However, the Environmental Protection Agency (EPA) has banned the use of asbestos in many products. In spite of this, asbestos is still used in some products that are manufactured and imported in the U.S. today.

Some products that still contain asbestos are:

The CDC has reported that mesothelioma deaths are declining among people under the age of 55. However, their recent study suggests that workers are still at a great risk for being exposed to asbestos in their workplace environment.

According to the CDC report, “Despite regulatory actions and decline in asbestos use, the annual number of malignant mesothelioma deaths remains substantial.”

We can only hope that this CDC report will bring more attention to the EPA and that the agency will continue to take great action towards officially banning asbestos in the United States.