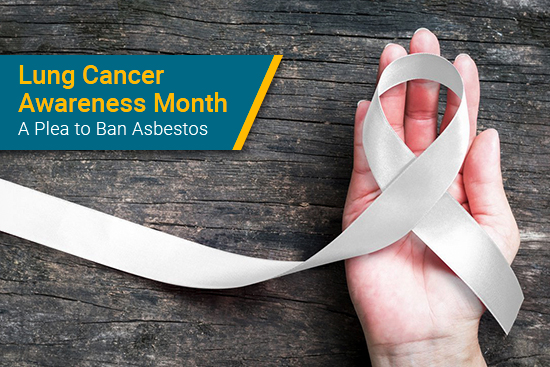 The U.S. House of Representatives had an opportunity one month ago to make a statement: The health of Americans is a priority. The action before them — whether or not to ban asbestos — seemed like a no-brainer.

However, in the last week of September, the legislative body let us down. They put party-line politics ahead of Americans’ well-being.

The House is about to go back in session. According to the official calendar, the body will vote on resolutions next week, Nov. 16-20. Those five days present another chance to pass the Alan Reinstein Ban Asbestos Now Act of 2020, which should be a book-closing moment on a decades-long American health crisis.

There’s an extra layer of symbolism this time. The House can make headlines by passing the bill during Lung Cancer Awareness Month.

Asbestos started with the label of “magic mineral” in the mid-20th century. It was prioritized for constructing houses, offices, automobiles, military ships and more. Now it holds a “cancerous” reputation, the sole cause of mesothelioma and a potential source of lung cancer.

The statistics should be enough to convince Congress it’s long past time to outlaw asbestos. According to Asbestos Nation, between 12,000 and 15,000 people in America die each year from asbestos diseases. Mesothelioma accounts for around 3,000 while lung cancer is attributed to 12,000 deaths.

Asbestos is dangerous when inhaled or swallowed. The concern is people rarely can tell when either occurs. Asbestos is so small that people won’t see it floating in the air in front of them. A simple inhalation could be deadly.

When it enters the body, asbestos can attack the tissue on the lungs and cause cancer to form on the organ. Sometimes asbestos enters the narrow lining near the lungs (pleura) or the lining around the abdomen (peritoneum), the two locations where mesothelioma forms. This mineral can also cause asbestosis, a deadly lung disease characterized by tissue scarring.

Most industries have distanced themselves from such a notorious (for all the wrong reasons) substance. They’ve found alternatives, and the Environmental Protection Agency has added its own restrictions. Still, the door for a resurgence remains cracked open.

Some believe only specific types of asbestos are dangerous, while others are still usable. Those beliefs could add to the death toll, and they’re more reason to ban asbestos once and for all.

Yet, in September, the House of Representatives had the Alan Reinstein Ban Asbestos Now Act on the agenda. They then pulled it when cross-party support faded at the 11th hour.

The explanation fell right in line with frustrating American politics, where each side pointed blame at the other. For at least two more months, asbestos was legal. Companies hoping for an asbestos comeback could hold out dangerous hope.

The House has another chance to right the wrong from September — and from the past century-plus of deadly exposure. Lung Cancer Awareness Month would be a fitting time to ban a substance that causes thousands of lung cancer deaths each year.

Even if the vote doesn’t occur in the next session, we hope it’s very soon. America got closer than ever in September to taking a massive step towards an asbestos ban. Every legislative session brings another opportunity, with another round of hope.

Right now, our hope lies with next week. Passing this bill during Lung Cancer Awareness Month is too perfect to pass up.