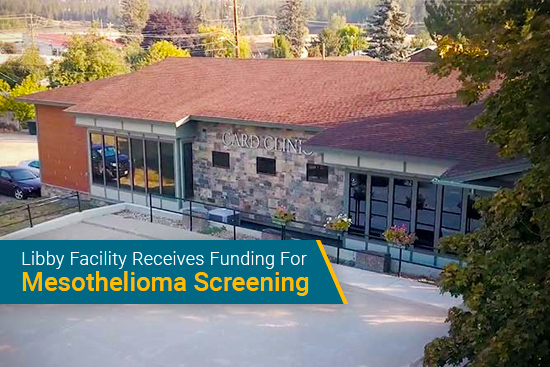 The residents of Libby, Montana, woke up each day for decades facing an environmental risk. The city was home to a vermiculite mine, which operated for much of the 20th century, and included the disease-causing mineral known as asbestos.

Even decades after the mine closed, the city’s residents remain on watch for the development of mesothelioma in themselves or others. A new federal funding initiative should help better detect the cancer.

The funds can provide residents from Libby and surrounding communities within Lincoln County with chest X-rays and breathing tests. These exams can help detect mesothelioma at an early stage. The clinic can also use the funds for operating costs.

“The CARD Clinic is saving lives by providing screenings for folks in and around Libby,” Tester said in a press release, which was cited in the Daily Inter Lake article.

The asbestos-tainted vermiculite mine caused thousands of Libby workers and residents to develop mesothelioma. This rare cancer’s only known cause is asbestos exposure. Miners were exposed through their occupation, and residents incurred environmental risk.

Libby’s mine didn’t just cause health concerns for nearby residents. As Mesothelioma Guide detailed in a recent blog post, Libby vermiculite and asbestos was sent to other areas of the country for processing.

A study analyzed the residents of a Minnesota town that included one such processing plant. The results revealed that mesothelioma incidence in this town was higher than usual.

However, the people in and around Libby were most at risk. The miners had direct contact with asbestos each day, and children played on vermiculite waste mounds without the slightest thought that they were at severe risk.

According to the Daily Inter Lake, this funding extends a program which started with the passing of the Affordable Care Act. This program offers preventative tests to Libby residents.

Dr. Brad Black, the chief executive officer at the CARD clinic, thanked Tester for recognizing the health concerns in Libby. He added that Tester, who regularly pushes for a total asbestos ban in the United States, “continues to help CARD maintain critical services for individuals who have suffered ill health effects.”