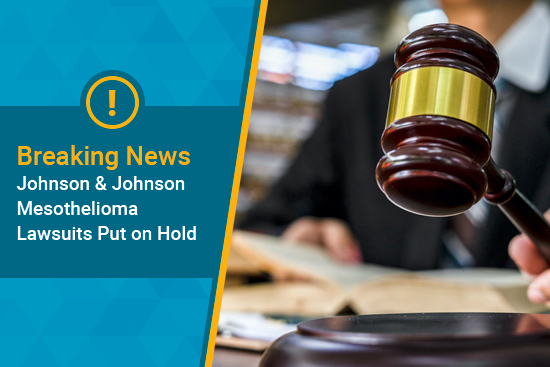 A judge halted asbestos lawsuits against manufacturer Johnson & Johnson. This news comes after months of anticipation about the company making a subsidiary to capture all asbestos claims related to its Baby Powder.

A federal bankruptcy judge in North Carolina hit the pause button on approximately 35,000 claims, according to a report published on the NPR website. The cases are delayed for only 60 days, setting a ticking clock on the holding spot for Johnson & Johnson and victims of the company’s malfeasance.

While the pause may feel like a loss for victims, the 60-day limit may be a win for claimants. A bankruptcy expert at Georgetown University wrote, “J&J gets a 60 day stay of litigation against parent corp, but that’s all. This is a major setback for J&J.”

History of Johnson & Johnson and Asbestos

Asbestos is a dangerous substance made of sharp fibers. It causes mesothelioma, lung cancer and ovarian cancer.

Use of Johnson & Johnson Baby Powder is linked to many cases of these cancers, including mesothelioma. This rare disease forms in the lining of either the lungs or abdominal cavity. The main tumor multiplies into smaller tumors and spreads toward vulnerable organs. If asbestos enters talc mixtures unnoticed, it puts consumers in danger of breathing in or swallowing the fibers.

Facing a mountain of lawsuits, Johnson & Johnson decided last year to end manufacturing and sale of talc Baby Powder. The move pulled the product from the market in Canada and the United States.

Johnson & Johnson is attempting to pull off a “Texas Two-Step” legal maneuver. According to the NPR report, the manufacturing giant created a new subsidiary in Texas. The company, called “LTL”, was made solely to absorb the parent company’s asbestos liabilities.

The new company quickly filed for bankruptcy in North Carolina, which is why a North Carolina bankruptcy judge ruled on the action. The legal decision is called a “Texas Two-Step” because it originated in Texas, where companies are allowed to split assets and liabilities into separate companies.

This move is called a “divisive merger” and allows companies to protect their assets from lawsuits. Filing for bankruptcy shields the new subsidiary from going to court or facing a massive verdict or settlement. It’s a mischievous move that denies victims of their deserved mesothelioma compensation.

U.S. Senator Elizabeth Warren, of Massachusetts, tweeted about the Johnson & Johnson cases. She said, “Another giant corporation is abusing our bankruptcy system to shield its assets and evade liability for the harm it has caused people across the country.”

This type of action is quite common with mesothelioma lawsuits. Companies create new LLCs to house asbestos liabilities, file for bankruptcy, and create asbestos trust fund accounts. These accounts pay victims but at a substantially lower amount than if it was a mesothelioma lawsuit settlement or verdict.

The U.S. Senate Judiciary Committee sent a letter last week to Johnson & Johnson asking the company to drop the Texas Two-Step maneuver. The company hasn’t yet, and the North Carolina judge ruled to move the case to New Jersey. This state is where Johnson & Johnson’s headquarters are based.

Continuing the Fight for Justice Against Johnson & Johnson

We urge the court system to deny Johnson & Johnson’s efforts to avoid paying victims. The manufacturer exposed thousands, if not millions, of people to asbestos through Baby Powder. The people who developed a deadly cancer should receive financial justice. Many have passed away, leaving their families with medical bills and lost wages. These families deserve their day in court and either a settlement or favorable verdict.

If you’re the victim of Johnson & Johnson Baby Powder asbestos exposure, contact our legal team. We can put you in touch with an asbestos lawyer who specializes in talc cancer claims. Email our lead patient advocate, Karen Ritter, at karen@mesotheliomaguide.com.