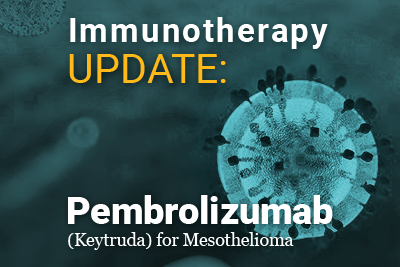 Is Pembrolizumab the Future of Mesothelioma Treatment?

A recent study published in The Lancet Oncology has revealed that the immunotherapy drug pembrolizumab may be an effective 2nd line treatment for mesothelioma. Pembrolizumab is the generic name for the drug Keytruda. It has been used as a second-line therapy for mesothelioma patients.

Pembrolizumab is typically used to treat cancers such as: melanoma, non-small cell lung cancer, and head and neck cancers. However, the drug has shown great tolerance in combatting antitumor activity in patients with malignant pleural mesothelioma.

By blocking the PD-1 receptor, pembrolizumab helps activate a patient’s immune system and aids in destroying cancerous cells. Once pembrolizumab binds with PD-1, T cells are able to destroy the mesothelioma cells throughout a patient’s body.

The recent study for the drug pembrolizumab consisted of 25 pleural mesothelioma patients. All of the patients in the study had already received first-line chemotherapy or they were unable to receive it. Patients were given a dose of pembrolizumab every 2 weeks for 2 years.

Researchers believe that combining a second-line therapy along with first-line chemotherapy, can help improve the life expectancy of patients.

The lead author of the study, Dr. Evan Alley, who is the chief of Hematology and Medical Oncology at Penn Presbyterian Hospital commented, “Most patients who receive a second-line therapy have a life expectancy of about 6 or 7 months, so to have four patients still ongoing at 2 years is very encouraging.”

During the study patients reported symptoms of:

None of the side effects that were experienced during the study were to a degree that made any participant quit the trial.This gives both researchers and patients hope in continuing the use of the drug to combat mesothelioma.

Later this year, the use of pembrolizumab will be used in conjunction with other treatments that are currently available. Researchers at the University of Pennsylvania have announced that they have plans for 2 new trials to test the drug.