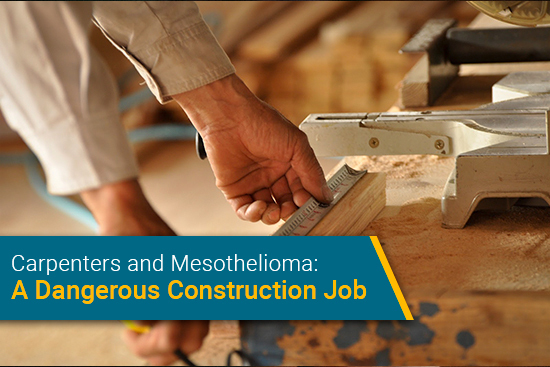 In the 20th century, medical experts linked asbestos exposure and mesothelioma with quite a few blue-collar occupations. At the top of the list were construction and insulation workers.

Numerous studies label carpentry as one of the most notorious for handling asbestos, which is a deadly substance connected to mesothelioma. According to years of scientific research, asbestos is the only known cause of this rare cancer. Daily exposure to this substance put many 20th-century carpenters at severe risk of developing mesothelioma.

If you worked in carpentry and developed mesothelioma — or you have a loved one who fits this description — contact our team. Our patient advocate and registered nurse, Karen Ritter, helps carpenters who have developed this cancer. Email her at karen@mesotheliomaguide.com with any questions about how your occupation led to your mesothelioma.

How Are Carpenters Exposed to Asbestos?

Carpenters are — or were — exposed to asbestos through working with and building construction components. Carpentry involves creating the foundation and structure for a building. The fundamental duties of carpentry include:

Asbestos is fire-resistant, cheap to produce and durable. Those three qualities made the mineral commonplace in construction and carpentry components. Everything, from floor tiles to ceiling tiles and wallboards to support beams, was built with asbestos. It protected them from catching fire, which was considered a safety benefit.

Towards the end of the 20th century, health experts urged industries to stop using asbestos. The cause-and-effect relationship between it and mesothelioma was well-publicized.

Asbestos in mineral form is composed of many microscopic and delicate fibers. These strands often separated from the original source and floated in the air. Carpenters working with asbestos could inhale or swallow these loose fibers, which are sharp and can irritate cells within the body. This irritation can cause cells to mutate, which forms tumors and cancer.

By the 1980s, most of the American commercial industry found alternatives to asbestos. Even so, mesothelioma has a decades-long latency period. This cancer often takes between 20, 30, 40 or even 50 years to develop. So carpenters who were exposed in the 1970s or 1980s may just be starting to notice mesothelioma symptoms.

Throughout most of the 20th century, carpenters faced a significant risk of asbestos exposure. Many studies report carpentry as one of the most at-risk occupations.

“Preliminary analysis showed that the risk was highest for carpenters and higher for plumbers, electricians and painters than for other construction workers,” the report stated.

The International Journal of Epidemiology reported the same — that carpenters faced the highest risk of regular occupational asbestos exposure.

In the United States, carpentry was considered “an extremely hazardous trade” for decades largely due to asbestos exposure. An article published in the American Journal of Industrial Medicine in 1997 showed proof of construction carpenters’ elevated risk of asbestos-related diseases.

The researchers uncovered that 121 members of the U.S. Carpenters’ Union passed away due to mesothelioma from 1987-1990. Due to mesothelioma’s long latency period, these deaths were likely connected to asbestos exposure from the 1950s, 1960s and 1970s.

During these decades, many U.S. carpenters weren’t provided the appropriate Personal Protection Equipment (PPE). The Occupational Safety and Health Administration didn’t update its outdated PPE guidelines until in 1994. These ineffective safety measures persisted for decades, which is why so many U.S. carpenters later developed mesothelioma.

Asbestos isn’t outlawed in America as of May 2020. Attempts to ban the substance — from commercial use or importation into the country — have stalled.

Fortunately, increased government regulations and improved business ethics have reduced the commercial use of asbestos. This has helped protect current and future carpenters from on-job exposure.

The term legacy asbestos refers to asbestos still present in old homes, offices and other buildings. Commercial use of asbestos was widespread for decades. Older homes or offices, ones that haven’t been remodeled in at least 40 years, likely include asbestos.

Since these buildings are so old, they’re likely deteriorating. This can disturb the asbestos that is present.

“Asbestos is no longer used in construction, but is found in tile floors, ceilings, boiler rooms and around insulated pipes in older buildings,” a Pennsylvania newspaper article from 1990 states.

Any carpenters tasked with repairing these buildings will face a threat of exposure. So the hazard isn’t totally eradicated. The United States Bureau of Labor Statistics reported around 1 million carpenters in the U.S. in 2018. The occupation is growing, too, with an expected 8% increase from 2018 to 2028.

Carpenters should prepare for loose fibers by wearing protective gear. They should cover their nose and mouth and beware of asbestos dust attaching to their clothes. Awareness of the danger can help carpenters take safety measures to protect themselves. It also helps protect anyone whom they interact with, including their work colleagues, family and friends.