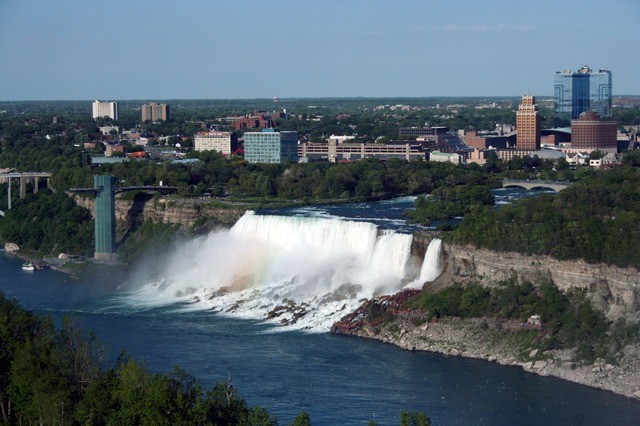 The EWG Action Fund analyzed data from 1999 to 2013 to compare how many deaths were caused by asbestos in different counties. The report focuses on 3 counties around the city of Buffalo. Buffalo is in Erie County with Niagara County bordering it to the north and Cattaraugus bordering it to the south.

In the state of New York, the average rate of asbestos-related deaths is 4.4 per 100,000 people. That rate is similar but slightly lower than the national average which is 4.9 per 100,000. The rates for the three counties in the Buffalo area are all much higher than either of those.

One of the probable causes of the alarmingly high rates is the type of industries that have thrived in the area. Over the years, Buffalo has been home to many large industrial companies and their factories.

One example of big industry is the Lackawanna Steel Plant. Located just outside the city of Buffalo, it was once the largest steel plant in the world. When the plant was open it employed tens of thousands of people and used asbestos in the production process.

Asbestos was once a very popular material used in a variety of different industries because of its incredible properties. It is useful for binding as well as fire-proofing and soundproofing. Occupational exposure to asbestos is the most common way that people develop mesothelioma.

The automotive industry also has had many factories in and around Buffalo. In 2013, the General Motors (GM) Tonawanda Engine Plant in Buffalo celebrated 75 years of operation. Unfortunately, for many of those years, asbestos was widely used to build automotive parts. Even now, asbestos is still found in some car parts.

Other Causes of Asbestos Exposure

Dr. Kevin Watkins, Cattaraugus County Public Health Director, had some other ideas about why the asbestos mortality rates were higher in his area.

“We have a high rate of smoking here and a lot of old homes,” Dr. Watkins told another news source.

Asbestos was commonly used to build homes prior to the 1980s when more people became aware of the dangers. Luckily, asbestos fibers are only dangerous if they are disturbed so most people are not in danger just because they live in a home built with asbestos products.

However, moving things around in an attic or doing even minor construction on an older house could disturb the asbestos. Any asbestos floating in the air could be breathed in and puts the occupants at risk of developing mesothelioma and other health problems.

Cattaraugus County’s high smoking rate doesn’t help the asbestos situation either. While smoking cannot cause mesothelioma, it does make it worse. Also, the risk of lung cancer is greater among smokers exposed to asbestos.

A main issue with asbestos exposure in the areas around Buffalo is the age of the buildings. Homes, factories, stores, and schools could all have been built with asbestos.

“Until we build some newer buildings, it’s going to be some time before we see this trend go down,” said Dr. Watkins.

In the meantime, his advice to residents of the area is to always wear a mask or respirator when doing home improvements or while working in some construction jobs.