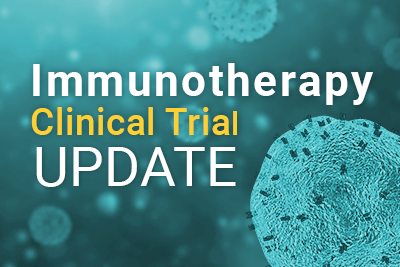 One of the best results to get from a clinical trial is a partial response because it involves all measurable tumors shrinking by at least 30 percent. The trial has resulted in evaluable results from 34 patients. 20 of those patients (59%) had a partial response to the treatment. Most of the remaining patients’ disease was stabilized. Only one patient in the trial experienced progressive disease.

94 percent of patients in this trial were able to stabilize their disease or shrink their tumors.

The standard of care for mesothelioma is a chemotherapy regimen of two drugs called Alimta (pemetrexed) and cisplatin (Platinol). This is the only officially FDA approved treatment for mesothelioma and it has about a 40 percent response rate for patients. This clinical trial uses standard chemotherapy along with CRS-207.

The results of the study were shared by, Dr. Thierry Jahan, at the 2016 European Lung Cancer Conference (ELCC) in Geneva, Switzerland. Dr. Jahan is a renowned mesothelioma specialist and a professor of medicine at the University of California in San Francisco. He has also played a major role in the development of CRS-207.

Researchers designed CRS-207 by modifying a type of bacteria called Listeria. Listeria is essentially a bacteria found in food that can cause food poisoning. Researchers were able to alter Listeria to reduce its negative effects in order to create CRS-207 without making patients sick. However, the body still recognizes Listeria as a threat and stimulates the immune system to respond.

An antigen is anything that the immune system recognizes as dangerous and attacks. CRS-207 works because it is made up of two antigens: Listeria and mesothelin. The antigen mesothelin is expressed in high quantities in mesothelioma tumors but expressed very little in healthy cells.

By combining mesothelin and Listeria, CRS-207 teaches the immune system to associate mesothelin with a threat, causing it to attack the mesothelin-expressing cancer.

Getting Involved with Clinical Trials

Phase 1b of the CRS-207 clinical trial is still ongoing but no longer enrolling. However, phase 3 is expected to begin in May. Contact our nurse for more information about joining clinical trials.