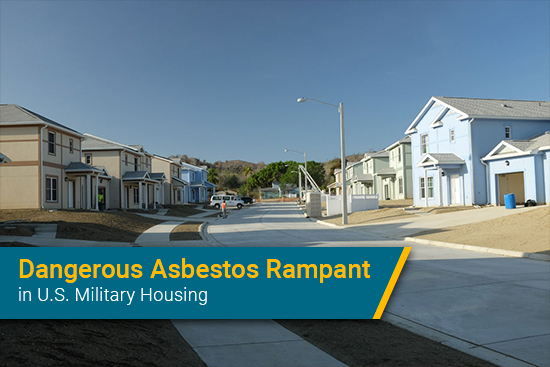 Of all occupation-based demographics, United States military veterans are the most affected by mesothelioma. Between one-third and half of mesothelioma patients are veterans, and the well-held reason is that the U.S. government treasured asbestos’ fire-resistant and durable properties.

Asbestos is the only known cause of mesothelioma, but it was used in the military for decades. Service members were exposed regularly while carrying out their duties.

We now know of another method of asbestos exposure for veterans with mesothelioma: military family housing.

The U.S. Department of Defense (DoD) received a scathing evaluation of its management of government-owned and government-controlled military family housing. The DoD Office of Inspector General, which is an independent entity of the DoD, assessed the presence of numerous health risks, including asbestos.

The report’s findings show a systemic failure on the part of the DoD to protect not only service members but also their loved ones.

“Unfortunately, these findings are unsurprising to me and all other veterans or current military personnel who have lived in older on-base housing,” said LCDR Carl Jewett, who served in the Navy for 24 years. “I can remember military buildings that had asbestos in the floor tiles, drywall, HVAC room and even caulk around the windows. Of course asbestos is in on-base housing for military families.”

He can also review your military service history and help you discover where you were exposed to asbestos and how your mesothelioma originated. Email him at cjewett@mesotheliomaguide.com for more about asbestos in the military.

The report traces back to a September 2018 request by Congress, which asked for an evaluation of military family housing. The explicit objective was to uncover whether military members and their families were exposed to hazards — and whether proper procedures were in place to identify, monitor and mitigate these risks.

The investigation initially focused on lead-based paint. It expanded to include asbestos, among other issues like mold, radon and drinking-water quality.

The government also owns or controls more than 36,000 units located outside the mainland. The investigation focused mostly on those foreign-located units. The report analyzed the health and safety management of eight military installations, which total to 15,525 military family housing units:

In at least five military housing installations, the investigation revealed a lack of accurate record-keeping regarding the use of asbestos-containing materials. Officials also did not keep records of the condition of these materials.

“Therefore, installation officials could not determine the extent that asbestos‑containing material hazards were present in GO‑GC military family housing,” the report stated.

Additionally, at six of the locations, officials didn’t notify residents of asbestos’ presence in the buildings. The report states that residents may have been exposed to asbestos “without being aware of the hazard.”

The report only identified the Naval Station at Guantanamo Bay as one of the locations with subpar management.

Military personnel were already at risk of consistent exposure. The military used asbestos in the 20th century to build barracks, ships, aircraft, trucks, tanks and more.

Their family members were mostly limited to secondhand exposure — from hugging the service member or handling their asbestos-ridden clothes. Now we know that they have been in close proximity to asbestos materials for decades.

“This issue doesn’t just affect service members,” Carl said. “It has an impact on their loved ones, the people who also inhabit these housing units: wives and husbands; children; even elderly parents. They’re all essentially living inside an asbestos box, and if they unintentionally disturb any materials that contain asbestos, they could inhale or swallow loose fibers and not have a clue.”

The DoD has policies that are intended to provide adequate shelter and residential space to military families staying in government-owned or government-controlled housing. These policies explicitly require the DoD and various military branches to:

These standards were not met at most of the locations investigated. The DoD Office of the Inspector General has revealed flawed guidelines and a lack of oversight regarding the department’s management of military housing.

The deficiencies found related to asbestos occurred due to the DoD’s hole-filled policies:

“This has been an issue for decades,” Carl said, “and it remains one for current and future military personnel due to the military not maintaining or upgrading older housing.”