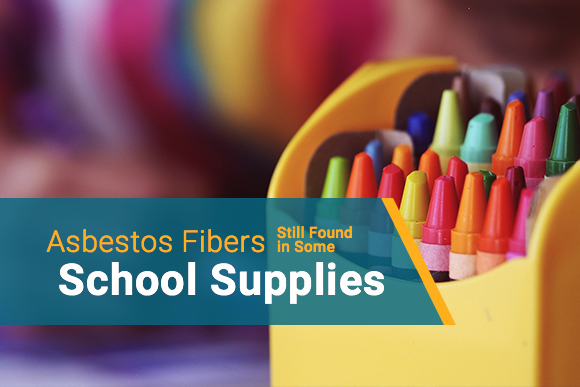 With the new school year underway, many parents have been faced with some unsettling back-to-school news. The U.S. Public Interest Research Group (PIRG) published its findings at the beginning of August after testing several brands and found asbestos fibers present in crayons produced by the discount brand, Playskool.

This is not the first time that these fibers have been discovered in school supplies intended for young children. In 2015, another report by the Environmental Working Group Action Fund found that asbestos, lead, benzene, and other carcinogenic and toxic substances appeared in a variety of school supplies including crayons, binders, and markers sold by companies like Dollar Tree, Costco, and Amazon.

Now, it seems as though the number of supplies containing asbestos fibers has been significantly lowered. According to the 2018 report, the fibers only appeared in the one brand of crayon produced by Playskool. Still, these substances being included in products for children is worrying, to say the least.

Why Does Asbestos Contamination Still Haunt Us?

As the second decade of the 21st century comes to a close, the dangers of asbestos and the diseases caused by exposure, like mesothelioma, are well understood. It is universally accepted by the scientific and medical communities that asbestos, like lead, is harmful to humans at any level and has had restrictions placed on its use by the government and considered unsuitable for almost all of its applications.

However, there still exists no outright ban on the substance and reports that lethal asbestos fibers can be found in the most unexpected places still persist, albeit at a much lower frequency. Following the U.S. PIRG report, Hasbro, the parent company of Playskool issued a statement that they would investigate these findings further:

“We are aware of a report of trace amounts of asbestos being detected in a small amount of product testing conducted by a private group and are reviewing our own certified lab testing, which to our knowledge, passes all regulatory requirements and had no detectable asbestos.”

There was no other comment given on the subject, and the company was able to hide conveniently behind regulatory requirements and minimum safety levels. This effectively passed the responsibility to the government, which can then just as easily juggle that responsibility back to the company.

Even in the face of these corporate and legislative shortcomings, there are reasons to be optimistic. Since the previous report published in 2015, there has been a significant drop in instances where asbestos fibers have been found in consumer products. This could mean that we are moving toward a world free from asbestos use. However, we still need the support of the government as well as the companies themselves to ensure the regulations that we do have in place are strictly enforced.

Thanks in part to the Internet and certainly the transparency of companies in these situations, the likelihood of new products being produced with asbestos is relatively low when compared to prior decades. More people than ever know about the dangers of asbestos and from a free market standpoint, if people are afraid to buy what you are selling then you should go into a different business.

Still, it is clear that trusting companies to make the changes on their own accord is a rather fanciful and idealized view on the issue. Parents are urged to do their own research and take a more scientific approach to the problem. There is a wealth of data and information published every year by organizations like the U.S. PRIG, the World Health Organization, and the Environmental Protection Agency, which have outlined the dangers of asbestos contamination and its consequences.

The best way to be sure your children will be safe from unintended exposure is getting involved with your children’s school. Particularly working with the school board to ensure the facilities and any supplies provided by the school are free of toxins and carcinogens.

Unless people take action at the local level and lobby the government to step in and place a ban on this substance, then there will always be a chance for contamination. And with the cases of mesothelioma and other asbestos-related illnesses on the rise due to past exposure, the only way for there to be any drastic change in the future is a measure to completely ban asbestos in the United States.