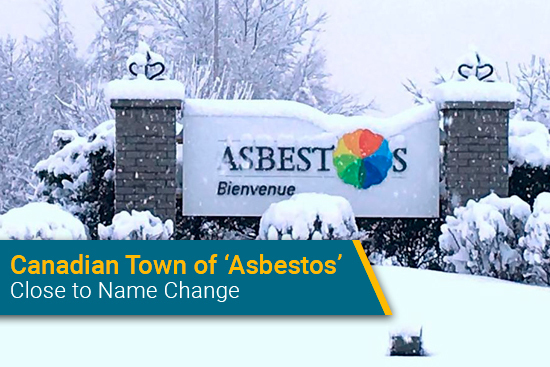 Update (10/29/2020): Residents voted to rename the town to Val-des-Sources, which stands for “Valley of the Springs.”

What’s in a name? The people in a small Canadian town called “Asbestos” will tell you that a lot of baggage is in theirs.

Fortunately, the town’s leaders and residents are taking steps to put their troubled identity behind them.

The town in southeastern Quebec is changing its name, and hopefully its asbestos reputation along with it. The four options on the table currently are:

The town’s mayor announced these four finalists last week in a city council meeting. The residents will vote on the town’s new name in October.

How Asbestos Made a Town Dangerous

The town of Asbestos got its name due to its history of mining for the 20th-century wonder mineral. The substance found its way into construction, insulation, electrical work, automobile parts and so much more.

It was durable, cheap and could guard against fire damage. Those three characteristics put dollar signs in corporate leaders and government officials throughout the world, the town of Asbestos no different.

By the 1980s, people were far more aware of the dark side of asbestos. It could cause many serious health issues, including a rare cancer called mesothelioma that forms in the linings of the lungs or abdominal cavity. In fact, asbestos is the only known cause of mesothelioma.

In 2012 alone, Quebec reported 180 new cases of mesothelioma. Many experts linked the high case count to the prevalence of asbestos mining in towns like Asbestos.

Quebec became the Canadian epicenter of the disease, and the town of Asbestos was called the “most dangerous town in Canada” by some news outlets.

“The doctors say … that the whole town is full of ‘very sick people,’ as reported in a CBC Radio article. “They are shocked at the poor working conditions which provide no protection from the dense cloud of deadly asbestos dust.”

Changing the name isn’t purely for people’s health and safety — or to respect those with an asbestos-related disease. The identity became an economic black eye for the town’s leaders and its 7,000 residents.

Asbestos, Quebec, is similar to the small former American mining town of Libby, Montana. Both hitched their economic growth and stability to asbestos mining, and both paid costly prices.

Asbestos’ Jeffrey mine, which closed in 2011, accounted for a significant part of the town’s job market and economy. According to a BBC article, it once provided half of the world’s asbestos supply and contributed to Canada being the world’s largest asbestos exporter by the 1970s.

The increased awareness of asbestos’ dangers led to countries across the world banning the substance. More than 60 countries today have outlawed the mineral. Canada joined the list around the same time as the Jeffrey mine closed. Even in companies like the United States, which hasn’t banned asbestos, many companies found safer, non-cancerous alternatives.

This commercial and industrial shift away from asbestos affected towns like Asbestos and Libby, the latter of which also experienced high rates of mesothelioma cases. They linked their long-term economic health to a dying industry, and their residents suffered.

The BBC reported that Asbestos’ population dropped from around 10,000 in the 1970s — at the asbestos mining and manufacturing peak — to 6,000 in 1999, when the United Kingdom banned the substance.

When funding to keep the mine operating stopped in 2011, the Asbestos township’s economy tumbled further. Unemployment rates rose to 12.4%.

Why a Name Change Has Been Long-Needed

Since mining ended nearly a decade ago, the town’s leaders and residents have looked for ways to revive their stale economy — and build towards a prosperous future.

However, despite shifting its economy away from asbestos, the town held onto its troubled name. That decision, as Mayor Hugues Grimard described, discouraged many investors from associating with the municipality.

After years of holding firm to the heritage, the decision to change the municipality’s identity came in November 2019. The leaders and residents hope a name change moves the town beyond its problematic reputation.

The Jeffrey mine is nothing more than a tourist attraction now, a way to remember the heritage while keeping people safe from asbestos. The township is pushing for alternative economic jolts, such as a brewery, magnesium mining and more.

The name still carries the baggage, though. Any of the four finalist options — even the one named after an asbestos mine — doesn’t have the negative branding like the current identity.